Memorial services for Arnold M. Stadheim of Albert Lea will be at 11 a.m. Monday at First Lutheran Church in Albert Lea. Interment will be at 10 a.m. Monday at Lakewood Cemetery, for those who wish to attend. Military honors will be accorded by Albert Lea veterans organizations. Visitation will be from 3 to 5 p.m. Sunday at Bonnerup Funeral Service, 2210 E. Main St., Albert Lea.

Arnold died Wednesday, May 2, 2018, at Thorne Crest Senior Living Community, surrounded by his family. He was 90. 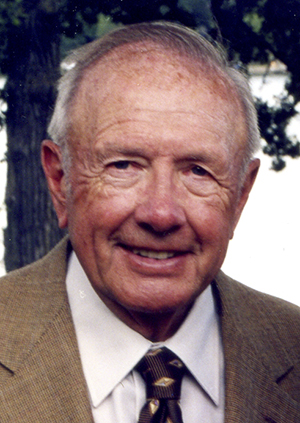 Arnold graduated from Albert Lea High School and served in the U.S. Navy. After graduating from watchmaking school in Kansas, he attended the Minnesota School of Business. He went to work as a watchmaker and jeweler for Fred’s Diamond Shop. Stadheim Jewelers was established in 1953. In that same year, he married Evelyn Opdahl, and they began their journey together. They were blessed with five children: Beth, Steven, Mark, Paula and Jeffrey.

Arnold was a member of First Lutheran Church of Albert Lea, where he had served a term as president of the congregation. He had also enjoyed his years as a member of the Kiwanis Club.

Arnold had a great love for his family, always taking interest in them and their lives.

Arnold was preceded in death by his parents; his wife, Evelyn, in 2009; son-in-law, David Knutson; brothers Edward, Louis, Richard and John; and sister, Edna Mae.

In lieu of flowers memorials suggested to The Arnold and Evelyn Stadheim Nursing Scholarship Fund or charity of the donor’s choice.

In honor of Arnold Stadheim, Stadheim Jewelers of Albert Lea will be closed Monday.