Funeral services for Audrinne Marie Kormann of New Richland will be at 11 a.m. Friday at St. Peter’s Lutheran Church in New Richland. The Rev. Scott Williams will officiate. Visitation will be from 5 to 8 p.m. Thursday at the church and one hour prior to the service Friday. Interment will be in St. Peter Cemetery in New Richland. 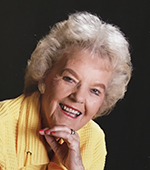 Audrinne was employed as a waitress/hostess for several area restaurants, sold Avon products and owned and operated Jerry’s Inn with her husband for over 18 years.

Audrinne really enjoyed being around people. She would strike up a conversation with anyone. Everyone was her friend. She also had a special passion for her children, grandchildren and great-grandchildren.

In the summer she loved to play golf in the ladies league and attend many tournaments. She even hit a hole-in-one! She was an avid sports fan. She was the all-time pitcher in the backyard for all of the neighborhood kids.

Audrinne and Jerry loved to dance the polka and waltz.