Funeral services for Carol Jean Cooper of Albert Lea will be at 11 a.m. Friday at Bridge Community Church North in Albert Lea. The Rev. Clayton Balsley will officiate. Visitation will be from 5 to 7 p.m. Thursday at Bonnerup Funeral Service and one hour prior to the service at the church. Interment will be in Lakewood Cemetery. 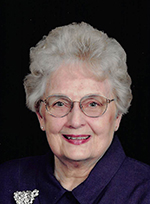 Carol died Friday, May 4, 2018, at Thorne Crest Senior Living Community in Albert Lea. She was 88.

Carol was born Dec. 30, 1929, in Luverne, the daughter of Herman and Edna (Welzenbach) Thorson.

She graduated from Luverne High School on June 5, 1947. After a short time in nursing school, she was united in marriage to Roy Cooper on June 25, 1949, in Mankato.

In her early married years, Carol spent time raising her family and took on the role of bookkeeper for the family business, Cooper Plumbing and Heating. When her children grew older, through the encouragement of her mother she began taking college classes. In 1970, she graduated from Mankato State University with a degree in business education.

She taught in the New Richland school district for over 22 years.

She was a very active member of First Baptist Church in Albert Lea for 40 years, teaching Sunday school, singing in choir, church circle, missions and many other roles.

She was preceded in death by her parents; husband, Roy; brother, James Thorson; and sister, Joyce (Arnie) Gabrielson.