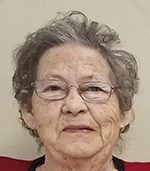 Visitation will be from 5 to 7 p.m. Thursday at Spencer Owen Funeral Home, 345 Sixth Ave. SE in Winnebago, and one hour before the service at the church. Funeral services will be at 2 p.m. Friday at Lutheran Church of Our Savior in Winnebago. The Rev. William Sabol will officiate. Burial will follow at Rosehill Cemetery in Winnebago. Tributes may be left at www.spencerowen.com.

Erla Mae worked at a turkey plant prior to her marriage to Henry. After her marriage, she moved to Woonsocket, Rhode Island, where Henry was stationed in the Army. After he was honorably discharged from the service, they moved back to the southern Minnesota/northern Iowa area, where Henry worked for various farmers and Erla Mae was a homemaker. She also worked at Telex in Blue Earth for a few years. In 1976 they moved to the family farm northwest of Winnebago, where she resided until after Henry’s death, when she moved into Winnebago. In 2016 she moved to Albert Lea, where she remained until her death. One of her favorite things to do was drink coffee and visit her friends.