Evelyn Roselle Hovland, 87, of Albert Lea, received her heavenly wings Sunday, Feb. 11, 2018, and entered the eternal gates at 6:50 a.m. at The Meadows in Albert Lea. A memorial service will be at 10:30 a.m. Saturday at North Blue Earth Lutheran Church in Brush Creek Township. The Rev. Milton Ost will officiate. Visitation will be one hour prior to the service at the church. Interment will be at North Blue Earth Lutheran Cemetery. Bruss-Heitner Funeral Home in Wells is assisting the family. To leave an online condolence, visit www.brussheitner.com. 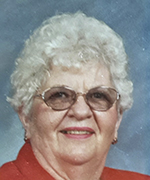 Evelyn Roselle (Lange) Hovland was born May 27, 1930, to parents William and Elenora (Rath) Lange in Bricelyn. She was baptized June 21, 1930, by A.R. Schende, pastor at Tabor Church by Brush Creek Cemetery. Her sponsors were Butch Redman and Harry Lange. She was confirmed in June 1943 by the Rev. H.K. Narum at North Blue Earth Lutheran Church. Evelyn graduated from Bricelyn High School in 1947 and furthered her education at the Mankato commercial college.

Evelyn was united in marriage to Richard E. Hovland on June 26, 1949, by Rev. H.K. Narum. She spent much of life enjoying cooking for others, whether it was for a family gathering, church event or as a cook at Camelback Inn in Arizona or Thorn Crest Senior Living Community’s kitchen in Albert Lea.

She was an active member at Grace Lutheran Church and enjoyed her women’s Martha circle, where she shared in many Bible studies and circle get-togethers. From her love of Grace came the name she chose for her beloved poodle, Gracie. Evelyn also became known as the egg lady at Grace, famous for her decorated deviled eggs. Besides her passion for cooking, she also loved to garden, and the neighborhood enjoyed her mixture of blooms — her specialty being different varieties of tulips. She also loved to write letters and was a dedicated pen pal. In earlier years, she and her husband, Richard, spent much of their time in Phoenix, where they fell in love with the landscape and both enjoyed working at Camelback Inn. But family eventually brought them back to their first place of love, Minnesota, where they spent the rest of the lives. Evelyn inspired many people in her cancer journey with her brave and determined spirit.

She is survived by her four children, Carroll Hovland of Albert Lea, Julie Yahnke of Owatonna, Laurie Hovland of Owatonna and Sue (husband, Steve) Wright of Albert Lea; grandchildren Kelly Hamborg and son, Avary, of Owatonna and Casey (Jenny) Hamborg of Farmington; her brother, Howard (Jody) Lange, of Blue Earth; brother-in-law, Arlen Legred, of Brush Creek; along with numerous nephews, nieces and cousins.