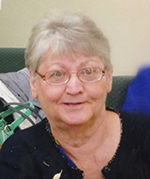 She was born to Eldreth and Dolores (Warner) Hillman on Jan. 25, 1947, and attended Albert Lea schools.

She was married to Kenneth Moller and later divorced.

A private family interment will take place at a later date at First Lutheran Cemetery in Ellendale.