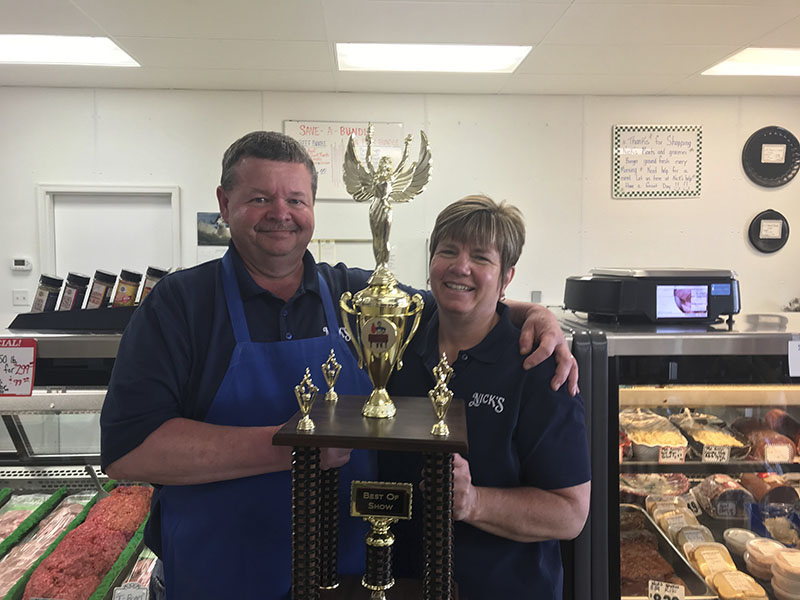 Todd and Cheryl Enderson, owners of Nick's Meat of Hayward, pose with the Best of Show trophy they won at the Minnesota Association of Meat Producers annual convention. - Kelly Wassenberg/Albert Lea Tribune

HAYWARD — It has been almost 19 years since customers could find Nick Schermer behind the counter at Nick’s Meats in Hayward, yet the business still bears his name and his recipes are still bringing home trophies.

The awards have been added to the shelves and walls of the business, which also sells a few staple grocery items.

The grocer operates as a custom slaughterhouse for beef and pork products, processes deer and has a full-service meat counter that makes a variety of products in-house, including fresh meat, deli meats, smoked and fully cooked products, jerky, snack sticks and summer sausage.

Todd Enderson said they win more awards for their summer sausage than anything else.

The couple purchased the business after Schermer decided to retire, and his recipes were included. By that point in time, Cheryl Enderson had already worked at the business for about five years, but it was her husband’s idea to go through with the purchase with a set of partners. After another five years, the couple bought them out to obtain exclusive ownership of the facility.

The change has been good for the couple as Todd Enderson said it’s nice to be his own boss.