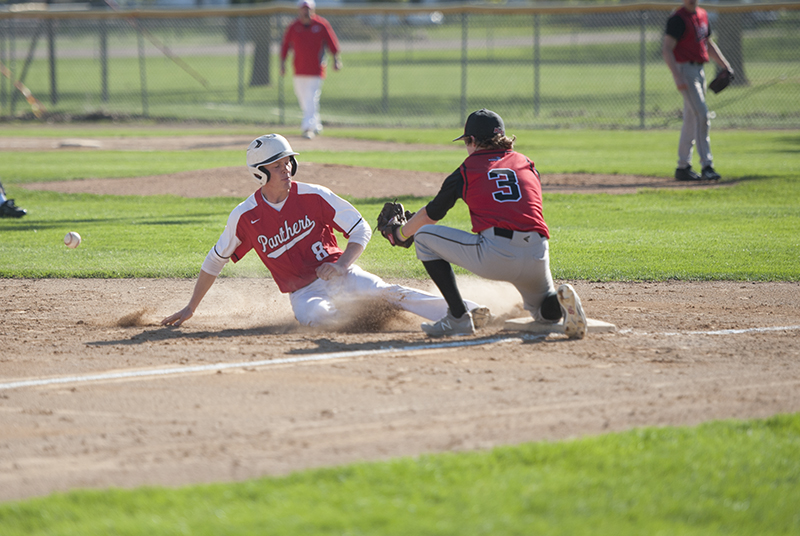 NRHEG senior Cole Staloch safely slides into third as the ball goes passed the base, he would go on to score the run. The Panthers would win the game 10-9, taking the lead in the sixth inning. - Tyler Julson/Albert Lea Tirbune

NEW RICHLAND — The NRHEG baseball team came into its matchup against Kenyon-Wanamingo on Tuesday night hoping to end its five-game losing skid in front of their home fans.

After numerous lead changes and ties, the Panthers were able to sneak out on top, beating the Knights 10-9.

The Panthers took a lead early in the first inning when senior Cole Staloch led off by getting hit by a pitch, followed by a stolen base and an error to bring him all the way around to home. Senior Cole Thompson was second in the lineup and was walked, followed by two errors by the Knights, allowing him to score the second run of the inning for the Panthers.

The Knights would come back with a rally of their own in the third inning, however. A hit-by-pitch and a walk put two runners on base. Three RBI singles and a two-run double put the Knights on top by a 5-2 advantage to end the third.

NRHEG would struggle at the plate in the third inning, but would come back with a new life in the fourth. Freshman Kordell Schlaak reached on yet another Kenyon-Wanamingo error and Staloch would follow by getting hit by a pitch for a second time. 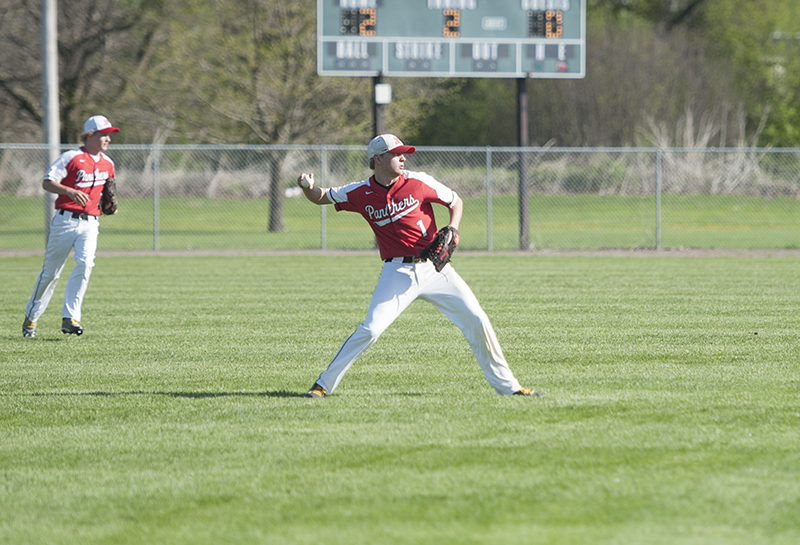 NRHEG senior Cole Thompson throws the ball back to the infield after making the catch in left field. – Tyler Julson/Albert Lea Tribune

Thompson would bring them both in with a crushing two-run double, and sophomore Jake Tasker would bat him in with an RBI single to tie the game at five runs each.

A couple of errors and a walk in the top of the fifth led to the Knights taking the lead again. However, the Panthers would answer back just in the bottom of the inning, when a passed ball scored both Schlaak and freshman Nick Staloch to tie the game once again.

In the top of the sixth, Kenyon-Wanamingo put a string of hits together and scored two runs, hoping it would be enough to put NRHEG away.

However, the resilient Panthers would not back down. Senior Brandon Routh would get on with a single in the first at-bat of the sixth inning. He would then make it all the way around the bases with steals and smart base running on wild pitches.

Junior Sawyer VanMaldeghem would reach on a walk and reached third base before Nick Staloch was also walked. What followed was one of the more bizarre scenarios to play out in a baseball game.

Instead of stopping at first after being walked, Staloch kept rounding the bases, attempting to bait the catcher into throwing to second, thus scoring VanMaldeghem. The catcher took the bait and threw the ball to second, only to see it sail over the second baseman’s head and into the outfield.

VanMaldeghem scored, while Staloch had gathered enough speed and momentum to bring him all the way home before the throw could reach the plate. The Panthers now had a lead for the first time since the first inning, 10-9.

The Knights would threaten in the top of the seventh, putting their first two runners on base and moving them into scoring position, but the Panthers were able to buckle down and record the three outs they needed without giving up a run.

The Panthers busted their losing streak to move to 3-7 on the season and will be back in action on Friday when they take on Bethlehem Academy in Faribault.