Prairie Profiles: Inspired by his aunt 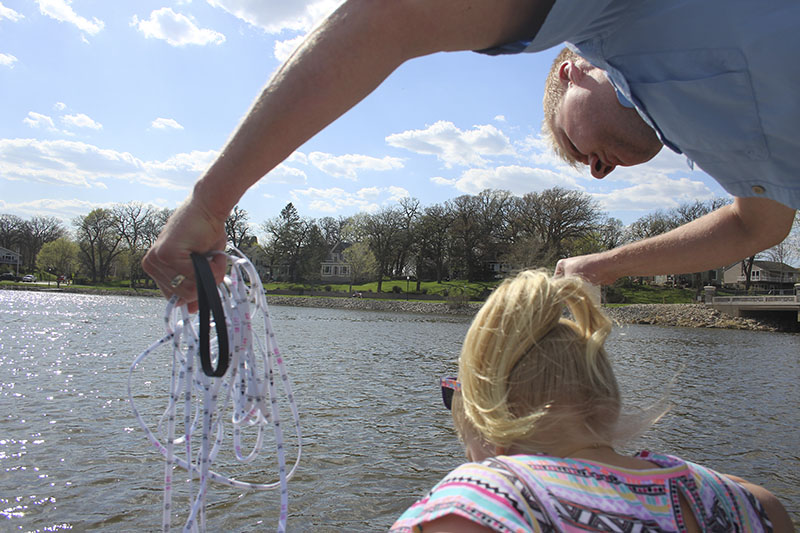 About once a week, when a Wastewater Treatment Plant lab technician leaves his job testing water, he goes out to work with more water.

Brandon Huston volunteers for the Minnesota Pollution Control Agency’s citizen water monitoring program. As part of that, he keeps one eye on Fountain Lake and the other on Wedge Creek off of Minnesota Highway 13, testing for water clarity. This is his second year as a volunteer. MPCA communications representative Mary Connor said there are four volunteers for the citizen water monitoring program in Freeborn County.

It is not the same work Huston does at his job, but both incorporate his science background. Huston said he was inspired by his aunt, Linda, who graduated from Riverland’s environmental technician program. He did the same, graduating in 1991. 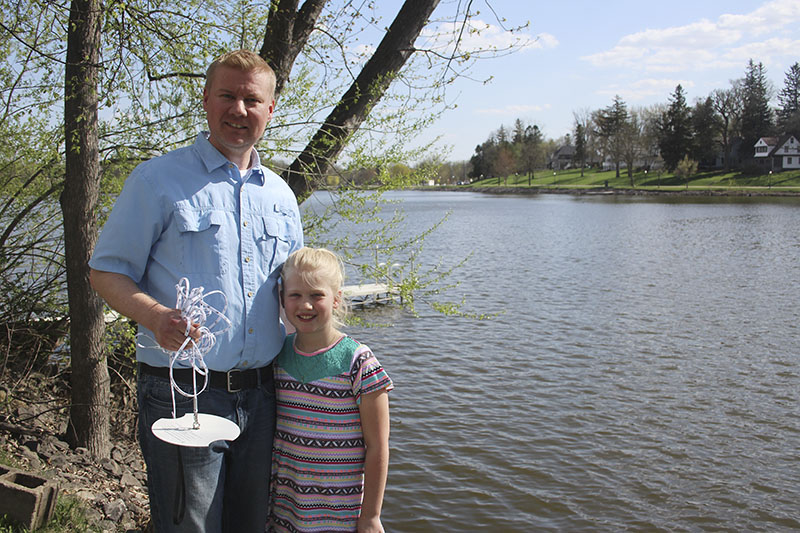 Brandon Huston has been monitoring the water clarity through the MPCA’s citizen stream and lake monitoring programs for two years now. He brings his daughter, Greta Huston, along, as she enjoys it and is learning about the process. Sarah Kocher/Albert Lea Tribune

“She was so excited about environmental water testing and things like that,” he said. “Ever since then, my aunt has been a big influence.”

Huston said he signed up to be a stream and lake monitor after seeing a press release that the MPCA needed more volunteers for the program. He spends roughly one hour a week, including travel time.

“I have a passion for the environment,” Huston said. “I love to see the water cleaned up. I’m a big user of the lakes … I like to see clean lakes and probably just equally important, I want to see my daughter’s generation have clean lakes.”

He also gets a sneak peak at the data before anyone else.

Huston’s 8-year-old daughter, Greta, will often go with him to monitor the water.

“She loves it,” he said. It’s father-daughter time, and also a little bit like going to the zoo: There are ducks, fish, frogs and deer to look at.

As part of the monitoring program, Huston received all of the necessary equipment and training from the state. Volunteers do not need a science background; Huston said anyone with a general interest in the environment would make a good volunteer. 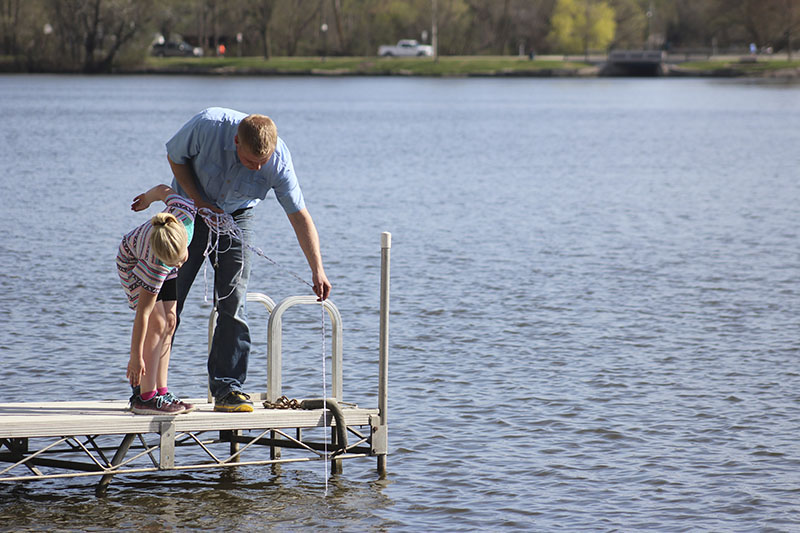 Brandon and Greta Huston demonstrate the use of a secchi disc Monday afternoon. The disc’s cord operates as a measuring tape, which tells the pair how deep into the water the disc was able to go before they lost sight of it. Sarah Kocher/Albert Lea Tribune

“You become a better citizen,” Huston said. “You understand what’s happening with our water.”

When he monitors Wedge Creek, he takes a 1-meter-long transparency tube with a secchi disc in it. The area that he pulls water from is about 2 feet deep. Huston said he collects a pail of water from the top foot and pours it into the tube. The disc is attached to a string. He lowers the disc further and further down the tube into the water and stops when he can no longer see it from the outside. This is a measure of the stream’s clarity. According to the MPCA, water transparency tells a lot about the health of Minnesota lakes and rivers, and in streams, sediment is the main cause of low transparency.

The process at Fountain Lake also utilizes a secchi disc, but rather than placing the water in a tube, Huston lowers a secchi disc into the lake. The disc’s cord doubles as a measuring tape marked out in feet, and he takes note of the depth at which he can no longer see it in the lake.

Huston also observes the physical condition, recreational sustainability and water color for both lakes and streams for the MPCA. Huston has an infrared thermometer he uses to take a temperature reading of the stream as well.

Finally, Huston will make notes about the conditions: air temperature, wind conditions and whether it rained recently.

Huston monitors Fountain Lake and Wedge Creek from April through September, and reports the data he’s collected in October. He said being a part of the program makes him one member in a team working toward water clarity and quality, including the MPCA and the Shell Rock River Watershed District. He noted that Albert Lea area has impaired waters. The MPCA’s 2018 proposed impaired waters list includes eight water bodies in the Shell Rock River Watershed District, including Fountain Lake. There are 17 water bodies listed from Freeborn County.

Huston said his work can complement that of others to help out with the big picture.

“This is a way that we can help them out to solve the problem quicker so they know how to dedicate their funds, so we’re a team,” Huston said.

He also interacts with the lake on a recreational level: He has walked around it, used it for boating and tubing and canoed on it.

“The reason I chose Fountain is it’s like the bullseye of Albert Lea,” Huston said. Wedge Creek feeds into Fountain Lake, so he can get a comparison between a large water body and one that feeds into it.

In his professional work, he likes the chance to see the science behind how things work.

It’s slightly similar to his favorite part about volunteering for the MPCA.

“I want to know why things work the way they do,” Huston said. He has been able to observe, for instance, the stream water clearing up after crops take hold because their root systems are holding soil better and cutting down on erosion. But for Huston, there is still more to see. Huston said he would like to keep monitoring, and to keep his eye on trends over time.

“To get a big picture, you almost have to do it for a number of years,” he said.

Interesting fact: Has been testing water for over 20 years at the Albert Lea Wastewater Treatment Plant