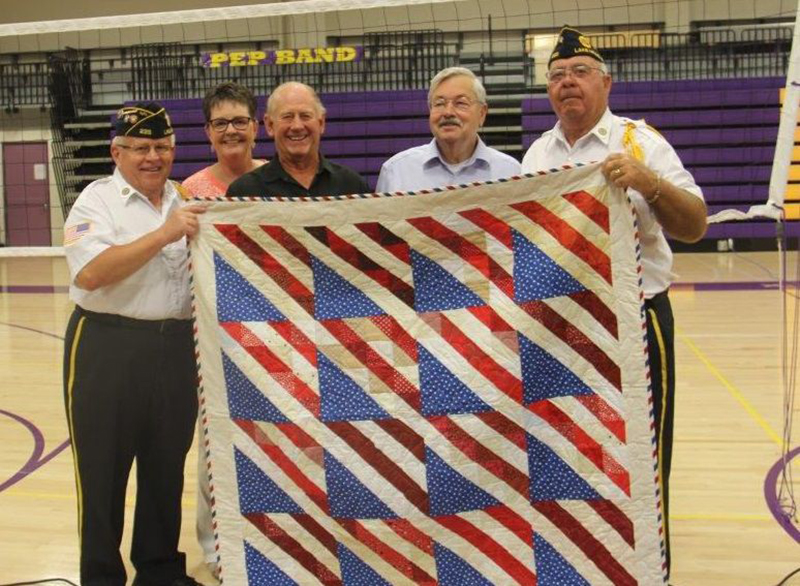 LAKE MILLS — David Groe of Lake Mills initially thought Friday’s ceremony recognizing his service during the Vietnam War would be a low-key affair.

Instead, he and his family walked into the Lake Mills High School gym to see a crowd of students, veterans and other community members on hand to witness the ceremony.

An old friend and neighbor of Groe’s — Terry Branstad, U.S. Ambassador to China and the former governor of Iowa — gave the main address.

“It was pretty overwhelming,” Groe said. “I didn’t expect all of that.”

Like many Vietnam veterans, Groe never got his medals. Fifty years later, he is finally going to receive them.

Charise Schwarm of Lake Mills worked with U.S. Rep. Steve King to help Groe get his awards and citations.

The medals still hadn’t arrived by Friday, and King wasn’t able to attend the ceremony for Groe.

However, Branstad, a former Lake Mills resident who served as governor of Iowa before being named an ambassador, read a letter King wrote to Groe.

“I hope you will continue to share your wartime experiences so the next generation may know the history that makes our country great,” King stated in the letter.

Groe was in the U.S. Marine Corps from September 1966 to September 1969. After basic training, he served in Vietnam for more than a year.

Groe had relatives from all over the country come to Lake Mills for the ceremony.

“We are all so very proud of you, David,” said Branstad, who grew up on a farm near Leland, graduated from Forest City High School and served as a military police officer during Vietnam.

He said Groe joined the Marines at a time when “it was not easy to answer the call of duty.”

“It was not a very popular time to serve in the military,” Branstad said.

Many Vietnam veterans weren’t treated well and did not receive the recognition they deserved at the time, according to Branstad.

“I’m proud to say that has changed,” he said.

Branstad also praised the Marines, noting they protect the U.S. Embassy in China and other American embassies around the world.

“I still work out with the Marines,” he said.

After the ceremony, Groe said his unit was stationed two miles from the Vietnamese Demilitarized Zone, which separated North and South Vietnam.

“You didn’t know what was going to happen from day to day,” he said.

During mortar attacks, “you didn’t know if you were going to make it home again,” Groe said.

He is happy that efforts are now being made to recognize Vietnam veterans.

He said Operation LZ, the Forest City event held in 2015 to honor those who served during Vietnam, “was fantastic for all the veterans.”

Branstad opened a law practice with Richard Schwarm in Lake Mills in 1974 and represented North Iowa in the State Legislature from 1972 to 1978.

After the ceremony, Branstad said he first got to know Groe in 1972.

That was the year Branstad and his wife, Chris, moved to a farm just a mile south of the Groe farm.

“We are very close friends,” Branstad said. “His kids and my kids grew up together.”

Groe was an electrician, so “he did some electrical work for us,” Branstad said.

He said he and Groe served in veterans organizations together and participated in community events.

He was able to step in for King during the ceremony because he happened to be back in Iowa for a visit.