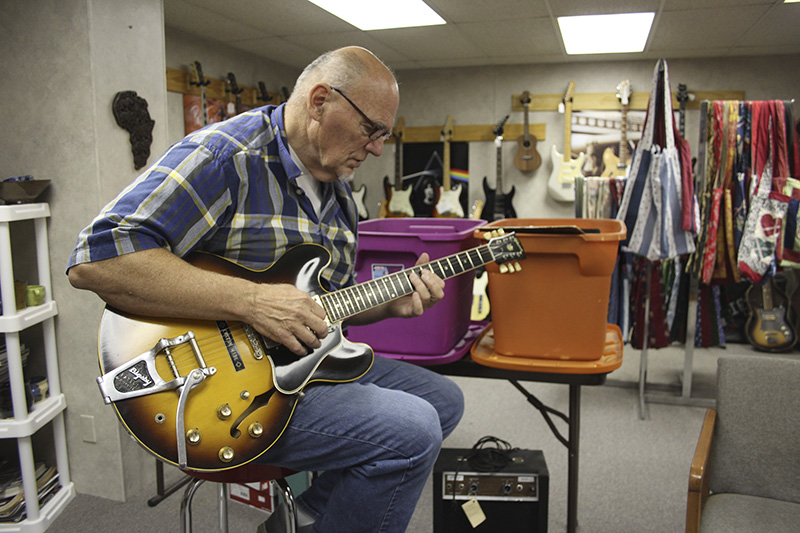 John Lang plays in the store he and his wife run, BJ Guitars & Aprons. Behind him, tubs of vinyl records are there for sifting through. - Sarah Kocher/Albert Lea Tribune

As you walk down the stairs into BJ Guitars & Aprons, you get closer to the sun.

More specifically, you may get closer to “Here Comes the Sun” — or “Abbey Road,” or any other classic record, for that matter — on the vinyl record player in the corner of John and Bonnie Lang’s basement shop on Main Street.

The stairs down are lined with more records from artists like Johnny Cash, Pete Seeger, Shawn Phillips, Elvis Presley and Tim Buckley. Inside the shop, a Pink Floyd poster holds court on the wall.

John and Bonnie Lang are permanent residents of Nevada who summer in Albert Lea. John Lang started the shop to collect, trade and sell vintage guitars, which he has done for the last 10 years. His goal is simple: to meet people, talk guitars and do some trading along the way.

BJ Guitars is 1 1/2 years old, but some items in his store are much older. He has guitars going back as far as the 1930s. John Lang also collects tube amps.

Before coming to Albert Lea, the Langs had a shop in Montgomery. He finds guitars through trades with other dealers around the country or from guitar shows. He said he has had locals come in to sell guitars.

But John Lang is a little picky. He’s particular on models. He wants Gibsons and Fenders.

“They’re considered the instruments that everybody plays,” he said.

Because of that, he said they are easier to collect and track.

“They maintain their collectibility,” he said. 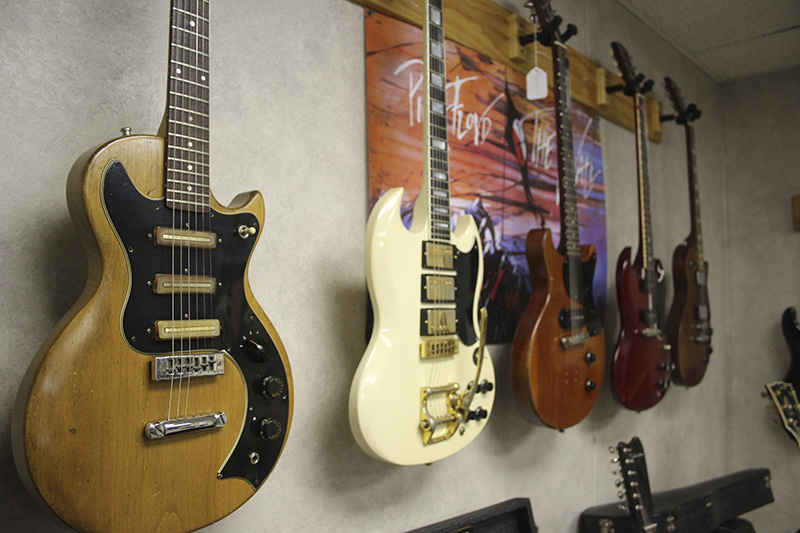 John Lang started collecting guitars 10 years ago, but his interest started in the 1970s. He said he likes the opportunity his store provides to speak to other guitar-lovers about the instrument. Sarah Kocher/Albert Lea Tribune

Lang does accept other brands, but usually resells them. The most he’s had in his shop at once is 75. Right now, he has about 65. Some of the guitars in the shop are not for sale, as the store also doubles as a display for his personal collection.

Even if it’s a guitar he’s not interested in, he wants to hear a guitar’s story, Bonnie Lang said of her husband.

Right now, what’s missing from that is a 1958 Gibson Les Paul Burst. He called it “everybody’s prize guitar.”

In addition to buying, selling and trading guitars, John Lang holds free introductory guitar sessions for those interested. For those who do know how to play, they can just play together. Right now, John Lang, who played guitar in a bluegrass band called Piper Road Spring Band, is learning to play “Streets of Baltimore” and “Rock Salt & Nails.”

People who come in for an introduction don’t have to bring their own guitar. John Lang has a few around.

“Not only are they playing some music, they’re playing these quality guitars,” he said.

Bottom line, John Lang wants to share his own appreciation for guitars with those who come to see him in his store.

“I just hope they get an appreciation of what these guitars are compared to what they’re producing today,” John Lang said.

While John Lang is in charge of the guitar portion of the business, Bonnie Lang is in charge of the boutique side. “Aprons” in the name is a nod to past wares, but as the shop is located under the Color Wheel, the Langs switched their offerings slightly to avoid competing for apron customers. They sell reusable bags, soy candles made by a friend and pottery done by her brother- and sister-in-law, both art teachers at Riverland Community College in Austin, Bonnie Lang said. The Langs also carry guitar strings.

Bonnie Lang, originally from Hayward, said she enjoys listening to guitars, although she and her husband don’t always agree on whose records should be spinning on the record player (Boz Scaggs is a point of contention).

“Who would think that a vintage guitar shop would be in town?” she said.