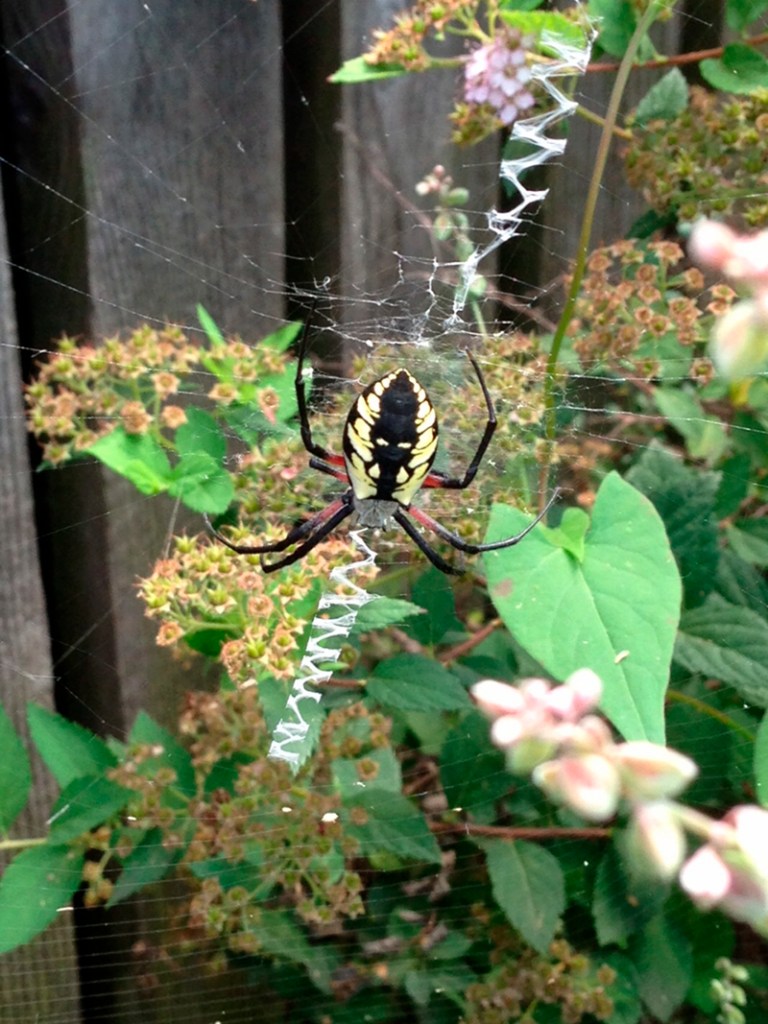 An Argiope penning a letter to the editor. - Al Batt/Albert Lea Tribune

“Everything is nearly copacetic. My neighbor Weasel rode along with me to an important meeting in a big city. My neighbor Still Bill was going to come along, too, but he has an enlarged procrastinate. It was like beating my head against a dead horse to get him moving, so Weasel and I left him home. I decided to splurge by eating in a fancy restaurant. It’s a good thing Still Bill, he makes more dust than miles, wasn’t with us because he says “gawrsh” instead of “gosh.” That would have embarrassed us to no end. It was the Pelican Club, named for the size of its bills. The headwaiter gave us a dirty look because we weren’t wearing dinner jackets. I thought a dinner jacket was the skin on a baked potato. Weasel barely survived looking at the menu. It jarred his preserves. He’s so cheap, he can’t open his hands far enough to get gloves on. His wallet is on a bigger chain than his dog is. Weasel doesn’t believe in impulse buying. He believes in impulse banking. Weasel and I went to church Sunday morning. The minister said in his sermon that every man, woman and child in the congregation would die one day. That made me smile.”

“That’s terrible! Why did that make you smile?“ I say.

“Because I wasn’t a member of that congregation.”

The next season is always just around the corner.

Rain fell. Waseca set the official state annual precipitation record in 2016 with a total of 56.24 inches, 63 percent of which fell between July and September.

Young animals are out and moving about. Some become roadkill before they discover that cars can be cold-hearted.

I saw no young robins in the yard. Baby robins are unable to fly well when they leave the nest. They must build muscles and grow adult feathers to be capable fliers and that takes time after fledging. Their spotted breasts and other camouflage markings help hide them from predators. They are skilled at blending in with their environment. Robins typically have two broods a year with both parents feeding the youngsters. About a quarter of those that fledge survive to November. About half of those birds survive to the next year.

I noticed some abnormal molts on birds in the yard — two bald blue jays and a bald cardinal. Barn swallows sliced the air, feeding upon swarming ants. The barn swallow is a Neotropical migrant. It travels south in flocks to winter in Mexico, Central America and South America. It travels by day, eating as it flies. It travels as many as 600 miles a day.

Bonita Underbakke of Lanesboro and Rod Meyer of Mankato each asked the identity of a beautiful black and yellow spider that appears to be trying to write a novel in its web. It’s an Argiope (ar-JYE-o-pee) or black-and-yellow garden spider. It’s also called a yellow garden spider, a signature spider or writing spider. It’s an orb weaver. They are typically found in late summer in the center of large, roundish webs. The spider’s large web often has an area in a zigzag pattern, called a stabilimentum, which resembles dental floss. The purpose for this is up for conjecture, but is thought to provide camouflage for the spider, attract flying insect prey by reflecting ultraviolet light or is a warning to birds to avoid the web. There is much folklore as to what the spider is trying to write. As with many spiders, the female is much larger that the male. She has a body measuring about an inch long and, including their legs, can be several inches in length.

“Where do wasps overwinter?” The only wasps that live over the winter are the queens. The other wasps perish with the onset of cold weather. In the fall, the queens find refuge in protected sites in and around the home and landscape, such as under a rock or tree bark. The wasps that survive the winter are fertilized queens that will build a new nest and colony from scratch.

“Restoring nature to its natural state is a cause beyond party and beyond factions. It has become a common cause of all the people of this country. It is a cause of particular concern to young Americans, because they more than we will reap the grim consequences of our failure to act on programs which are needed now if we are to prevent disaster later. Clean air, clean water, open spaces — these should once again be the birthright of every American. If we act now, they can be.” — President Richard Nixon’s 1970 State of the Union message to Congress

“That man is richest whose pleasures are cheapest.” — Henry David Thoreau