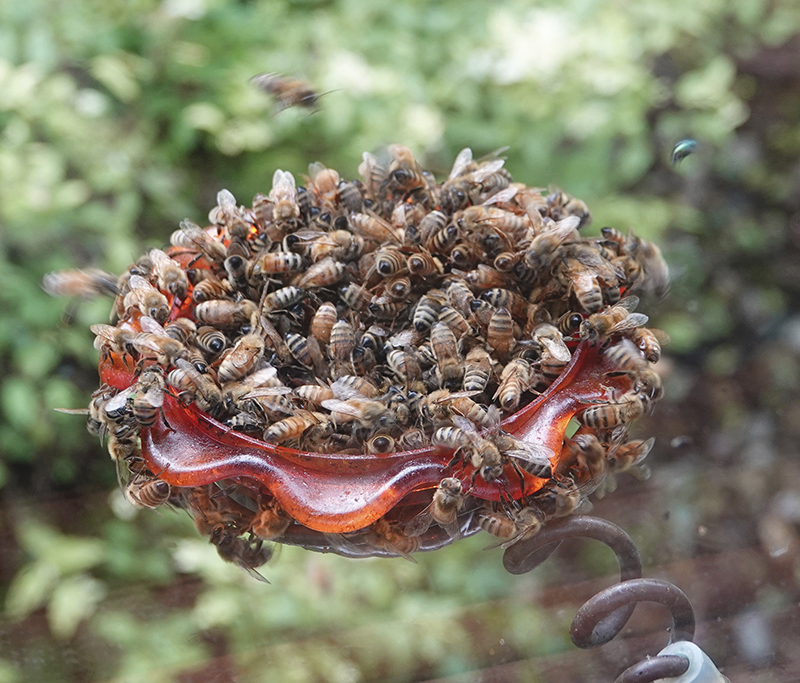 “Everything is nearly copacetic. Pop is still playing with a full deck, but it takes him longer to shuffle. He’s a speed bump. He slows down everyone. Pop rocked himself to sleep trying to get out of his easy chair. The only exercise Pop gets is opening pill bottles. He was complaining of double vision. Ma told him to keep one eye closed. Pop talked me into buying an extended warranty for my truck. It covers only the glove compartment door and the vanity mirror. I have an old truck. It’s shedding parts. I’m trying not to have an old truck. I’m thinking of trading my 12-year-old truck for an 11-year-old truck. I should sell it to Junior. I figure with what he’d save in speeding tickets alone, it’d pay for itself.”

Lee Johnson, who I met at Sherburne National Wildlife Refuge, sent this:

“In 1957, my mom and dad, Hal and Dori, moved into their new home in Rochester. They became fast friends with their next-door neighbors, Gene and Ken. They remained best friends for the rest of their lives. Dori and Ken quickly discovered that they had a penchant for playing practical jokes on each other. They delighted in seeing who could play the most diabolical prank on the other. This practice, also, remained in effect for all of their days. This is the story about a joke that was played a long time ago and has attained an almost legendary status as their best joke ever.

“Ken had several bird feeders in his backyard and had an obsessive hatred for the squirrels that continually raided them. Ken was a handyman/tinkerer and decided he would build a ‘squirrel-proof’ feeder. He made many attempts at this, but they all failed. Finally, he hit upon a design that he was sure the squirrels would not be able to defeat. He drilled a small hole in the center of a “flying saucer” snow sliding toy and ran the pole that supported the feeder through it. He was extremely proud of his invention, as it was totally effective at keeping the squirrels at bay. He bragged quite a bit about it. One day, my mom was driving home from some errands and, a couple of blocks from the house, she saw an unfortunate squirrel in the road that had been killed by a car. By the time she got home, a fiendish plan had formed in her mind. She went in the house, got a paring knife, drove back to the squirrel’s body and cut its tail off! (To this day, the Johnson children find it almost impossible to believe that our sainted mother actually did this!) She took the tail back home and waited until she was sure no one was home next door. She then took a thumb-tack and secured the tail to the back of Ken’s ‘squirrel-proof’ feeder. She left just enough of the tail dangling so that Ken could see it from his kitchen window. She then went back home and waited for the fun to begin. Not long after, the folks who lived on our block were treated to a sonic blast that will be long remembered. Ken started yelling loudly at the squirrel to vacate his feeder. When Ken saw this was ineffective, he began swearing at it like the sailor he used to be. Finally, he went running out to the feeder and quickly realized that he had been totally pranked.”

“What’s the difference between a dragonfly and a damselfly?” Dragonfly eyes are much larger than those of a damselfly, which have a gap between them. Dragonflies are short and stocky in appearance. Damselflies have long and slender bodies. At rest, a dragonfly holds its wings out from its body, like an airplane. Damselfly wings are held over its back.

“How can I keep wasps and bees away from hummingbird feeders?”

Moving the feeder a short distance can decrease insect visits without discouraging hummingbirds. Use hummingbird feeders with bee guards or make the nectar less sweet — five parts water to one part sugar instead of the usual four parts water to one part sugar. Bees and wasps prefer feeding in sunny areas and are attracted to feeders with yellow colors. Give insects their own feeder with a sweeter solution in full sun.

Please join me for some nature stories on Tuesday, Oct. 2 at 7 p.m. at Southwest Middle School Little Theater at the corner of U.S. Highway 69 & Front Street. This event is free and open to the public.

“As I look back on the part of the mystery which is my own life, my own fable, what I am most aware of is that we receive more than we can ever give; we receive it from the past, on which we draw with every breath.”— Edwin Muir

“Birds are indicators of the environment. If they are in trouble, we know we’ll soon be in trouble.“ — Roger Tory Peterson