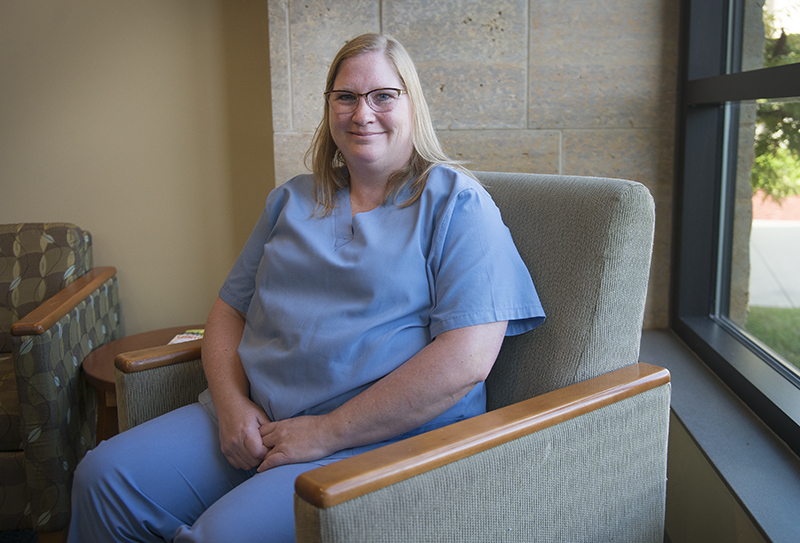 Linda Altermatt is scheduled to donate a kidney next week in a process called paired exchange, which will lead to her husband receiving a kidney. - Colleen Harrison/Albert Lea Tribune

On Tuesday, a wife will donate a kidney so her husband can have a new one. The only catch? He won’t be going home with her kidney.

Eight people across the country will undergo surgery on the same day so half of them can walk out with a new kidney in a process called paired exchange. Dan and Linda Altermatt of Ellendale make up one pair.

In paired donation, viable living donors who do not match their intended candidates still give a kidney, but that kidney is then shared with another pair for whom the kidney is a viable match. The donor of that pair will then do the same, passing along kidneys until each donor has given and each candidate has received.

“I thought it was a good option,” Dan Altermatt said. “Obviously, a living donor seems to be better than a deceased donor, and you probably know someone who was willing to donate but may not match you, so that was a great option for this situation.”

In his 20s, Dan Altermatt was diagnosed with IgA nephropathy. The antibody immunoglobulin A (IgA) made its home in his kidney. The result is an inflammation that impedes the kidneys’ ability to filter waste from Altermatt’s blood.

Linda Altermatt said her husband was able to control his condition through blood-pressure medication, but he was told he might need a transplant over the years. That need became apparent about three years ago, when his kidney function started to decrease at a rate that surprised Linda Altermatt in its speed.

Dan Altermatt said he has been on the list for a kidney for 1 1/2 years. Should things go well Tuesday, he has halved the median time spent on a kidney transplant waiting list; according to the National Kidney Foundation, that number is typically 3 to 5 years.

He’s anxious to get it done and move on to another life chapter, Dan Altermatt said.

He will have to wait a few hours longer than Linda Altermatt. She has her surgery in at Mayo Clinic Hospital’s Methodist Campus in Rochester at 5 a.m. Tuesday morning, while Dan Altermatt’s surgery will come later in the afternoon. Linda Altermatt said they will each have their own separate teams of nurses. She is confident in their care. It helps that she knows the ones on Dan Altermatt’s team. Linda Altermatt, who works in surgical services at Mayo Clinic Health System in Albert Lea and Austin, previously worked at the Methodist campus — with nephrologists.

“I know they’re going to take great care of him,” she said.

While she is not as familiar with her husband’s surgery, she has been there for surgeries just like hers.

This is the Altermatts’ second time trying a paired exchange. The first time was a seven-pair chain — that’s 14 people — with an intended surgery date of Aug. 23. It was all set up, Linda Altermatt said, but something went wrong in a cross-match before the date.

That’s the tricky part of having so many people as a part of the process, Linda Altermatt said.

“Once they pull one person out, they take their paired person with them, and the whole chain falls apart,” she said.

The Altermatts do not know who else is in their chain. All she knows is that her bloodwork was shipped out to Philadelphia, so Linda Altermatt assumes her kidney is headed east.

After surgery, Linda Altermatt said the Transplant Center requires the pair to stay in Rochester for three to four weeks because of how quickly any signs of organ rejection have to be treated. They’ll be renting a house for a month through the Serendipity House Network, which helps house patients who need to stay in town due to health care needs. Thanks to an anonymous donor, their entire stay has been covered.

“We have no idea who gave that money,” Linda Altermatt said. “I wish we did, so we could thank them, but it was just incredible, just an incredible generous gift for someone to do that.”

Add to that Linda Altermatt’s co-workers, who took up a collection to help them with additional expenses while in Rochester, Dan Altermatt’s co-worker, who volunteered to be a kidney donor (but wasn’t viable) and all of the family members who are traveling and taking time off work to care for the husband and wife post-surgery, and Linda Altermatt said the couple is fortunate to have a large network of care.

Thanks to that, “We can focus on recovery and not worry about those kinds of things,” she said.

Dan Altermatt also said he has quite a thank-you list, but there’s one name at the top.

“Linda is basically donating and allowing me to have a kidney, whether it’s hers or not,” he said. “I’m basically giving her all the praise for giving up part of her body for me.”