Nancy Louise (Koontz) Kirsch, 66, of Austin passed away unexpectedly Tuesday, Sept. 11, 2018, in the early morning hours at her home. 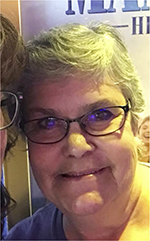 Nancy was born Dec. 4, 1951, in Northfield to Roy and Marie (Stangl) Koontz. The family moved to Austin, where she graduated from Austin High School in 1970. She was married to Chester Iverson for 16 years. Together they shared three children. On Aug. 4, 2005, she was united in marriage to the love of her life, Chuck Kirsch.

Nancy received a kidney transplant from her brother, William Koontz, on May 4, 2013. In March 2017, she retired from Hormel after 25 years. Nancy adored her dogs, enjoyed going to flea markets and garage sales, and, as of most recently, loved going to the camper. She was a very caring and loving woman who enjoyed spending time with her family, especially her grandchildren and great-grandchildren.

Just as Nancy had received an organ donation, she wanted to do the same for others; hence, she became a designated organ and anatomical donor at Mayo Clinic.

As per Nancy’s wishes, there will be a celebration of life from 1 to 3 p.m. Sunday at River Oaks Event Center, 3700 11th Place NE in Austin.

In lieu of flowers, memorials are preferred to Gift of Life Transplant House in Rochester.