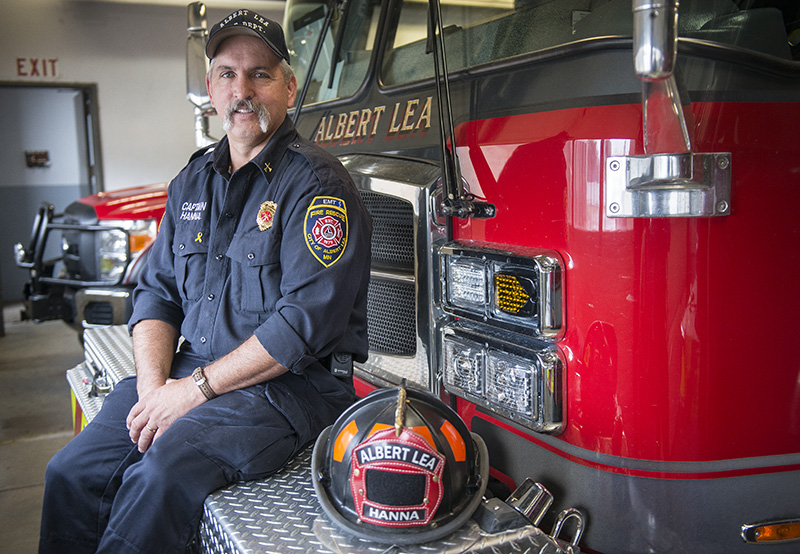 Albert Lea fire captain retires after 29 years on the job

Scott Hanna has been a firefighter for the Albert Lea Fire Department for 29 years — 21 of those years as a captain.

Hanna retired last week after nearly three decades on the job — a job he said is “impossible to describe” in just a few words. There isn’t a sufficient enough description for how great it is when things go right, or how horrible it is when they go wrong.

The 55-year-old said it’s always fortunate when a firefighter can survive the job long enough to retire. Hanna attributed his own success on the job to the people he has worked with in the department. The commitment, dedication, training and the “seriously brilliant individuals” he has worked with have made for a strong team mindset within the fire department, he said. The examples of dedication he has witnessed have gone above and beyond — including a firefighter who lost his own home to a tornado still standing guard for the rest of the community in the destruction’s wake.

According to Hanna, firefighters do best when the different generations pass on their knowledge to the next. He said his life was saved more than once from a veteran on the squad teaching him how to best test the structural integrity of a floor in a burning building before walking on it. It was Hanna’s same intent to pass on his own knowledge to the next generation; he said he wouldn’t have been able to walk away from the job if he hadn’t felt he had done so. Having given the rest of his co-workers about a year’s notice of his planned retirement, Hanna hoped that as he finished his last shift, his team would be so prepared they wouldn’t notice his absence.

While Hanna has seen his share of tragedy while on the job, the lighter moments stay with him just as much. Responding to calls of a squirrel on someone’s TV, ducklings trapped in a storm drain or rescuing a pet bird “stuck” in a tree are just a few of the quirky anecdotes that stick out to the Albert Lea native.

The other moments that stand strong in his mind are the times when the community banded together to help those in need, and those affected by tragedy. For instance, when the Farmland plant burned down, Hanna said no one needed to buy water; citizens were bringing water and Gatorade to firefighters and other response personnel working around the clock to manage the destruction and the fallout.

Hanna said he hopes people pay attention and realize what they have with the fire department and other emergency and public safety services. They’re not just sitting around waiting when they’re not fighting fires. They don’t just respond to emergencies; they also work to prevent them, whether it be through inspections, education or training. They replace or fix flags on top of buildings, help clean up storm damage and get into schools to educate the public from a young age about fire safety, among a myriad of other services.

“Our job is if something’s wrong in this community, our job is to make it better,” he said. “If we have the time, we’re here to serve.”

Hanna said firefighters should be proud, but not egotistical, and know that the job is serious, but not to miss the fun parts of it — something he said his department embodies. Time and again, Hanna said he has seen firefighters step up and go above and beyond to help each other and their families in trying times, whether dealing with cancer, family issues or anything else.

“If everyone functioned the way these guys did, we’d be unstoppable,” he said.

To say his retirement is bittersweet would be too simple, but for Hanna, it was time.

His family has paid a large price for his chosen career, he said, and as a result they’ve missed out on some of the more traditional aspects of family life over the past three decades. Time is different when you’re a firefighter and have every sixth weekend off (maybe), Hanna said, and your work week is nine days long. Holidays or vacations aren’t guaranteed.

“They’re used to me working all the time,” he said.

Still, his decision to retire surprised his family.

Now that the Hannas’ children — ages 25, 27 and 31 — are grown and living on their own, Scott Hanna said that while they’ll be able to have him around more, the biggest change will be for his wife, Stacey.

“When she said, ‘I’m really excited to have you around,’ I knew I was doing the right thing,” he said.

Hanna plans to start playing catchup on all the things he has promised his wife he’d do over the past 30 years, while making himself more available to his children, granddaughter, parents and in-laws as well. He said the citizens of Albert Lea have come first for a long time; now it’s time to take some time off and put his family and their personal life first for a while.

While Hanna has to retire from Community Education and Brookside Boathouse with his retirement from the fire department, he plans to stay involved with the community.

Hanna said he has been “very fortunate to have had the opportunity to work for the citizens of Albert Lea” while doing something he loves and raising his family in the same area.

Born and raised in Albert Lea, Hanna went to the University of Minnesota knowing he would return to his hometown afterward. He and his wife chose to build a life and raise a family in this community.

“I knew what I was coming back to,” Hanna said.

“We live in Albert Lea. We made a conscious decision to raise a family here,” he said. “I think it was a great decision.”

While Hanna said it’s great to see the community step up in times of dire need, he hopes more people step up in the day-to-day aspects to be more preemptive as well.

“We have a great community. … Every little bit that we do matters.”

In the meantime, the future is open for Hanna. While he plans to get back into community involvement when he’s able to, he’s looking forward to catching up on the things he has missed these past 29 years — hiking with his wife, hunting and fishing, and being with his family.