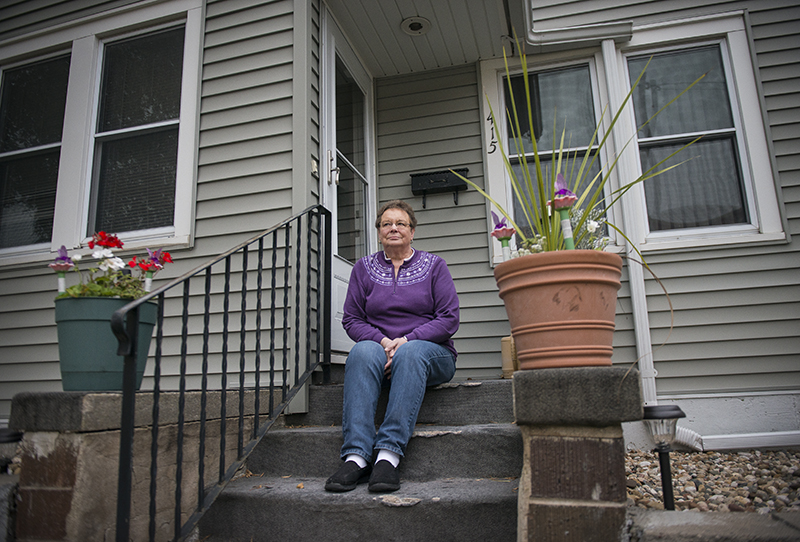 Evelyn Willaby sits on the front steps of her home at 415 S. Newton Ave. on Thursday. Willaby will likely have to sell her home to the city of Albert Lea to make way for a new fire station in its place. - Colleen Harrison/Albert Lea Tribune

Why do ‘they want to take these homes?’

Now she will likely have to sell the home to the city after the Albert Lea City Council voted Monday to place the fire station east of the Freeborn County Government Center.

Willaby said the city should have decided to build the fire station on Blazing Star Landing.

Willaby, who fixed her home and built a garage on the property in 2000, said she does not know where she will live after she sells her house.

“I don’t really understand why they want to take (these) homes when they’ve got an empty lot to build on,” she said.

“It would make more sense, since they’re uprooting (these) families.”

Willaby said she is wary of moving into another location and having to make payments after she already paid off her current house.

Willaby, who has lived in Albert Lea since 1959, has met with the city a few times to discuss the looming transaction.

“I just don’t think that it’s right for them to uproot you, take you out of your home,” she said.

Willaby said the first time she learned the city wanted to buy her property was through the media.

Albert Lea City Manager Chad Adams said acquiring the properties was necessary to conduct the project, and no purchasing offers have been made. Adams hopes cost estimates on the properties are unveiled in the next 30 to 60 days.

“It’s an essential public purpose in the community, so these types of facilities are essential to benefit the entire community, and the proximity to the Law Enforcement Center is one of the key variables that we looked at in terms of the benefit of this particular site,” he said.

Though support from owners in selling the properties varies, everyone he has talked to said they would sell the property to the city, he said.

He said it was “not ideal,” that the station will force people to move, but the city had conversations with affected property owners “well in advance” to gather feedback.

Manuel Cortinas of 220 E. College St. said when he was told he might have to sell at least his 4 1/2-stall garage to the city, he questioned why the station was not being placed on Blazing Star Landing.

“At first I wasn’t too happy, because I always think that, ‘well, they have all that land where Wilson’s used to be,’” he said. “Why don’t they just build it there?”

Cortinas said he will likely have to move no matter how he feels.

“There’s nothing I can do, because they already said they want to build here,” he said.

After the existing buildings on the Newton Avenue site are acquired, they are expected to be demolished from December to April, and the project is expected to be completed in December 2019, with move-in the same month.

The 28,000-square-foot facility is expected to cost more than $9 million. As of earlier this month, an estimated $6.5 million of project funding could come from the city’s fire pension fund, with $1 million coming from the police pension fund for the facility’s emergency operations center and training and fitness space. There is expected to be $100,000 in funding from fire fund interest, and $150,000 of project funding is expected from building services for capital furnishings.

An estimated $200,000 of project funding could come from equipment certificates.