After a reoccurrence of cancer and battling Parkinson’s disease, Richard Neve passed away. 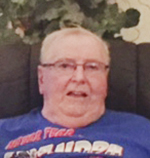 A memorial service for Richard “Dick” Neve will be at 3 p.m. Friday in the chapel at St. John’s Lutheran Community in Albert Lea. Chaplain Don Malinsky will officiate. Visitation will be one hour prior to the service at St. John’s. Interment will be at a later date with immediate family at Walters Cemetery.

Richard Albert Neve was born Sept. 10, 1936, to parents Albert and Alma (Heidemann) Neve in Walters. He grew up on a farm near Walters on the Freeborn and Faribault county line. Dick graduated from Kiester High School in 1955, where he ran track and played football.

He then started working at Queen Stoves and Page and Hill Homes. For 35 years he worked at Progress Castings as a supervisor.

The family would like to give a special thanks to the St. John’s staff for taking such good care of Richard.