An Albert Lea high-risk predatory offender who allegedly exchanged sexual text and video messages with a 15-year-old girl and threatened to send her images to other people over the internet was charged with two felonies Thursday in Freeborn County District Court. 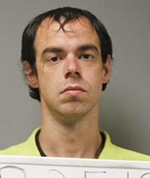 Earlier that month, the Albany officer spoke to the girl’s mother, who said her daughter told her someone going by the name of “Tyler Cole” — later identified as Mayer — on the internet had gotten mad at her and was threatening to send nude photographs of her “to everyone on the internet,” court documents state.

The two allegedly met on the online application ChatGum in early April.

The girl allegedly told Mayer she was 15 immediately after they started talking. She said Mayer was originally hesitant but later said he was 18.

Mayer allegedly used the name “Tyler Cole” in a fake Facebook profile and had a picture of a male sitting with two small children.

Mayer is classified as a Level 3 offender, an offender with the highest likelihood of reoffending.

As of Friday morning, Mayer was in custody.