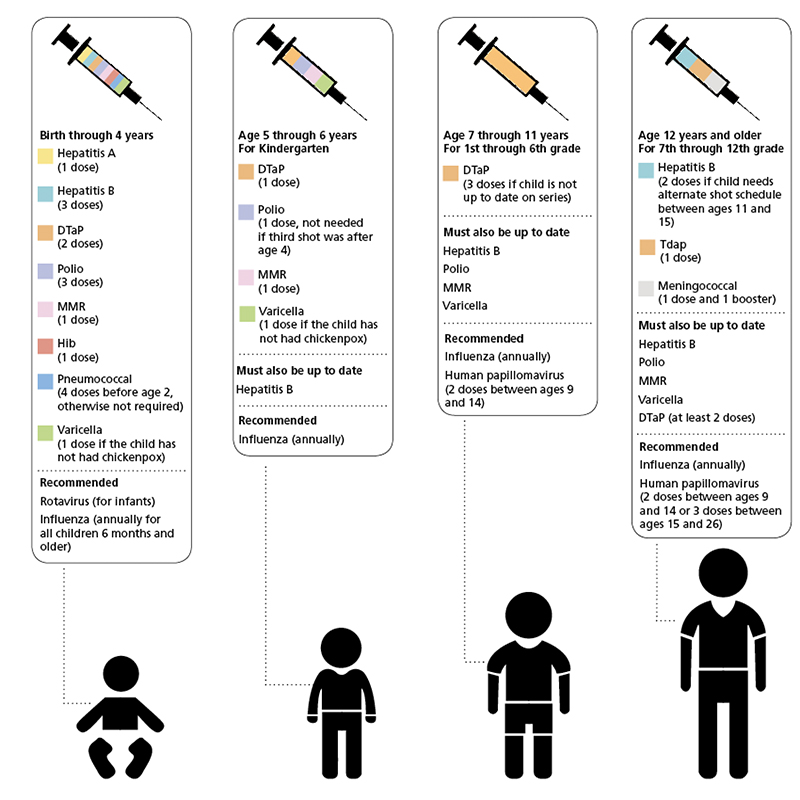 The Minnesota Department of Health requires students of different ages come in with different vaccinations, many of which are received as a scheduled series. Mayo Clinic Health System in Albert Lea and Austin pediatrician and department chair Sarah Scherger said the biggest reason in Albert Lea and Austin students may need to catch up on vaccinations is when they have moved to the United States with either no record or an incomplete record. For questions about your child’s vaccinations, speak to a pediatrician. - Graphic by Kim Ehrich/Albert Lea Tribune

Should they move forward, proposed changes to Minnesota’s school immunization law could boil down to this: same shots, different rules.

The Minnesota Department of Health is considering changes to the state’s immunization rules. Proposed changes are in a public comment period open through Oct. 1.

The Department of Health has proposed three changes.

“It’s really thinking about making sure we’re aligned to medical practice standards in simplifying implementation of the law,” said Jennifer Heath, supervisor of education and partnerships unit for the Minnesota Department of Health immunization program.

One component would remove the age restrictions for the pneumococcal and haemophilus influenzae type B (Hib) vaccines. Since the time those vaccines were added to the law, Heath said the Center for Disease Control has updated how those vaccines are used. For instance, Heath said the pneumococcal requirement only applies to children under 24 months old, but children can get caught up on that vaccine up through age 4. The Department of Health wants to make sure the law reflects that potential for catch-up so children can still receive full protection, Heath said.

The law states a child must have one dose of Hib at or after 12 months of age, but the CDC recommends children who start the series on time — and most children do in Minnesota, Heath notes — will actually receive two to three doses before that one-year mark.

If there is potential for another disease not specified in school law to spread, Heath said the commissioner of health may still be able to take action, but at that point, the action would not be a question of school immunization law.

According to Heath, the last rule update was 2014, when the state added the meningococcal requirement for students entering seventh grade. This recent round of proposed changes is not about new vaccines, but about bringing the law up to date with medical practice standards and protecting all Minnesotans in the process.

“It’s hard to say whether an individual school nurse will notice the difference, but we’re hoping that this does at least clarify some of the questions we get commonly,” she said.

Keeping in touch with parents and following up about when students are due for immunizations means they are a constant conversation in the district, Dugger said. On the list of priorities for student health care, she ranks it No. 2 behind health plans for student safety.

“We spend a lot of time on immunizations,” she said.

For Mayo Clinic Health System in Albert Lea and Austin pediatrician and department chairwoman Sarah Scherger, in children’s visits to the doctor, immunizations clock in as just one item on a long list of conversations regarding health at school.

“A lot of people think of them as shots visits, but they’re really not,” she said.

That is one component, but there are others: checking weight gain, height growth, hearing and vision, addressing learning difficulties in school, sleep, hygiene, electronic use, and car and booster seats.

“Those are direct things that impact school,” she said.

Heath said this is the early stages of a conversation about changing the immunization law. Those wishing to comment to the Minnesota Department of Health on the proposed changes can do so through Oct. 1.