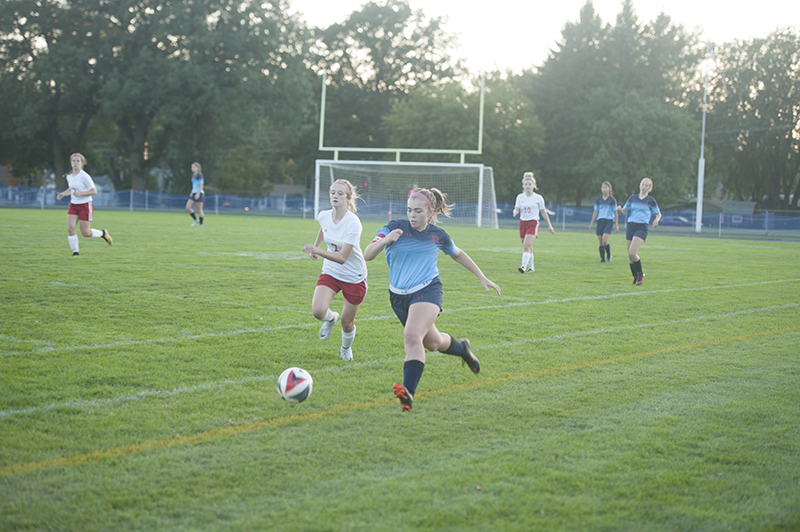 Albert Lea junior Sydney Nelson chases down a ball near the sideline Monday night against Austin. The TIgers won the match over the Packers 3-0, improving their season record to 2-1-1. - Tyler Julson/Albert Lea Tribune

The Albert Lea girls’ soccer team played its makeup game against Austin on Monday night that was originally scheduled for last Tuesday.

The match was all Tigers from the opening whistle, as they controlled the tempo the entire game, dominating time of possession and cruising to victory over the Packers, 3-0.

Early in the first half, the Tigers got off a couple nice shot attempts when junior captain Turena Schultz sent two shots just over the net. Schultz would eventually find the back of the goal midway though the half on a free kick, giving the Tigers a 1-0 advantage.

Ten minutes later, sophomore Jacy Rosas added to the total with a goal of her own after breaking past a couple of defenders. The goal was assisted by sophomore Cynthia Herrera. 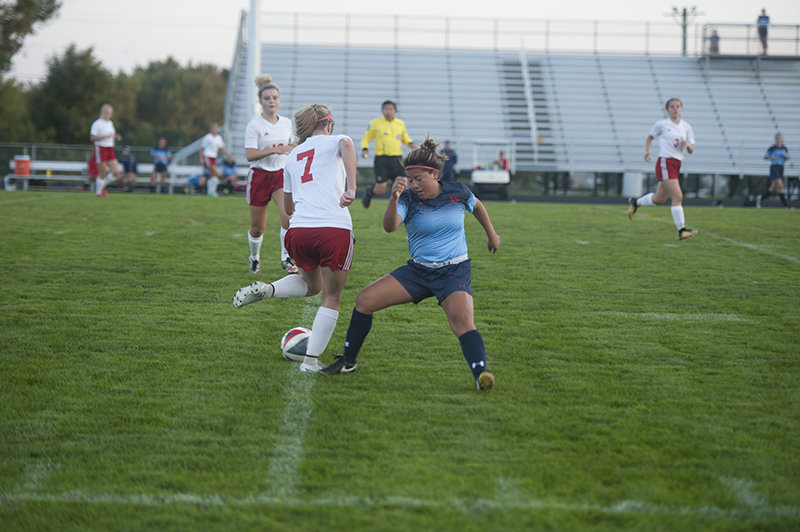 Albert Lea sophomore Jacy Rosas takes the ball away from an Austin player Monday night. Rosas scored a goal off an assist from Cynthia Herrera 30 minutes into the first half. – Tyler Julson/Albert Lea Tribune

Sophomore Lucy Sherman was close with a shot on goal late in the half, but saw the ball sail just right of the target, sending the Tigers to the halftime break up 2-0.

Albert Lea would waste no time getting back to business in the second half, when Sherman capitalized on an opening,  scoring of Herrera’s second assist of the night just 20 seconds into the half.

The Tigers would keep the score that way through the rest of the game, thanks in large part to a physical defensive game.

It was a relatively quiet game for junior goalie Marissa Vogt, who was forced to defend minimal shots on goal by the Packers.

Head coach Laura Wangen was proud of the performance her team put on Monday night.

“Another solid team effort,” she said.  “As a team, we are battling illness and injuries, yet players are stepping their game up and filling whatever position they are asked to fill. Having three more games this week, we need to keep our focus and take it day by day.”

The Tigers climb to 2-1-1 on the season and will play again Tuesday when they travel to Winona to take on the Winhawks.

They also have home games scheduled for Thursday against Owatonna and Saturday against Mankato Loyola.