Albert Lea native leaves behind a legacy of political activism 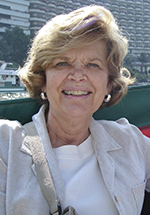 Kayser graduated from Albert Lea High School in 1956, and after graduation moved to Chicago and was a ticket agent for Capital Airlines.

She met her husband, Tom Kayser, on a blind date in Chicago, and they married in 1959.

Kayser, who lived briefly in San Antonio during the early part of her husband’s Air Force career, moved to St. Paul in 1965 after he found a job at a law firm.

Kayser’s first political work came when she was a senior in high school as a volunteer for Adlai Stevenson’s unsuccessful presidential bid in 1956.

She later became known for raising money for progressive Democratic candidates, from school board races to presidential campaigns.

Kayser was active for more than three decades with Planned Parenthood Minnesota, North Dakota and South Dakota, serving as board president from 1989-90 and as an active board member for most of the 30 years.

“Marlene did all she could to make Minnesota a nurturing and supportive environment for women and girls,” said Terre Thomas, a friend of Kayser’s.“She believed the health care provided by Planned Parenthood was critical to creating such an environment.”

“She knew that work would help build support and leverage the power of Planned Parenthood’s voice in Minnesota,” Thomas said.

“She was tireless in her work to recruit volunteers, raise funds, mentor leaders and engage activists.”

Kayser was a fundraiser and volunteer for The Advocates for Human Rights, a 501(c)3 organization that implements international human rights standards to promote civil society and reinforce the rule of law. She became involved with the organization as part of its delegation to the United Nations Fourth World Conference on Women in 1995 in Beijing, China.

“Marlene was a tireless advocate, rolling up her sleeves and (getting) involved in many ways,” Thomas said. “She worked in countries transitioning to democracy after the fall of Communism in central and eastern Europe.”

Kayser traveled as part of an advocates delegation to Bulgaria to document sexual harassment and workplace dissemination. She was on a team that investigated domestic violence and the government’s response in Macedonia, work that Thomas said was used to pass laws and policies protecting women in both countries.

“Marlene was masterful in sharing her own experience with advocacy, organizing and fundraising,” Thomas said.

Thomas said Kayser’s life was “devoted to helping make St. Paul and the world a more fair, safe and supportive place for women and the less fortunate.”

“She was a gracious and tireless volunteer, devoted board member and generous philanthropist/fundraiser for Planned Parenthood, Advocates for Human Rights and legions of Democratic candidates for more than 40 years,” Thomas said.

She said Kayser and her husband were known for hosting fundraising events in the home and backyard of their Mississippi River Boulevard residence in St. Paul for nonprofit organizations and candidates and elected officials, ranging from U.S. presidents and U.S. senators to school board candidates.

Thomas Kayser was “elegant, soft-spoken, very funny and possessed a down-to-Earth quality that made everyone — from presidential candidates to interns — understand that they had a part to play in making the world a better place — and that they belonged.”

A celebration of Kayser’s life is expected to take place next month in St. Paul. Details will be posted on her CaringBridge page.

Tom Kayser Jr. said he spent “a lot of time” in Albert Lea and Clarks Grove as a child.

He said his mother “loved the area,” was baptized and married at East Freeborn Lutheran Church and had been in contact with high school classmates, including a trip she took with a classmate in a private jet to Hudson Bay to see polar bears.

“She was caring and kind and encouraging to her children just like she was to everyone else,” he said.

He described his mother as “great fun” who was “always ready for a new adventure.”

He noted his mother believed government’s role was to help the disadvantaged and assist people in overcoming oppression.

He said his mother remembered where she came from in her roles.

Tom Kayser Jr. said his mother was at peace after she was diagnosed with a brain tumor.

“She went out the same way she lived,” he said.