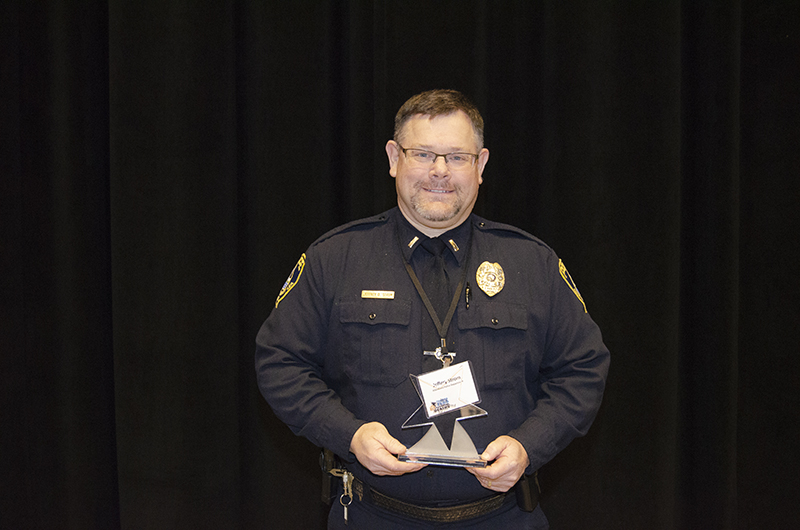 Lt. Jeff Strom of the Albert Lea Police Department was awarded the Education Star Award at the Toward Zero Deaths conference, which took place Tuesday and Wednesday in Mankato. - Provided

Ten individuals and organizations were recognized by the Minnesota departments of health, public safety and transportation at the statewide Toward Zero Deaths conference for their efforts to reduce the number of traffic deaths and serious injuries in the state. According to a press release, road fatalities have decreased by 45 percent since the program began in 2003.

“TZD is a tremendous asset to the state in reducing traffic deaths,” said MnDOT Commissioner Charlie Zelle. “The individuals and organizations honored this year for their work are making a difference to save lives and reduce serious injuries on our roadways.”

The awards are given annually to individuals and organizations in Minnesota that show excellence in TZD’s emphasis areas of enforcement, emergency medical and trauma services, education, engineering, child passenger safety and judicial/court systems.

Award winners have shown their leadership and creative capacities to improve traffic safety throughout the state and build partnerships.

“Some people may think that aiming for zero deaths on Minnesota roads is not a reasonable goal, but we’re making progress,” said Public Safety Commissioner Mona Dohman.

“I’m proud of our statewide traffic safety partners and TZD award winners for seeing that vision and working every day to turn it into reality. Minnesotans are listening and increasingly making safe choices on the road.”

“Crashes are a leading cause of injury and death in Minnesota, and as with other public health concerns the best solutions require cooperation across sectors,” said Commissioner of Health Jan Malcolm. “I continue to be impressed with what we can accomplish when we work together to prevent crashes and improve health outcomes for those who are injured.”

Among those honored was Lt. Jeff Strom of the Albert Lea Police Department, who was recognized with the Education Star Award. Strom is active in the Freeborn County Safe Roads coalition.

The release stated he conducts quarterly fatal reviews and prepares all crash files for review. He participates in traffic safety events at area schools and organizes mock crashes and impact speakers for the community.

Strom also volunteers to teach most of the parent component of driver’s education. He also helps coordinate monthly child passenger safety clinics. Strom has participated in TZD enforcement and education for more than 11 years.