The man vying for the District 27A representative position is calling for a “long-term and sustainable funding solution for roads and bridges.” 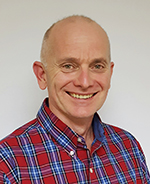 Gjersvik said Freeborn County’s list of unfunded capital improvement projects includes 60 miles of roads over the next decade, noting Freeborn County has the 13th-largest road system in the state, and manufacturers and ag producers in the district need a “robust and reliable” road system.

“Grants and special funding are no way to solve this problem,” he said. “We need stable, dependable funding so that government entities and the contractors they hire can plan for investments in labor and equipment.”

Gjersvik said he “would not rule out,” supporting increasing the gas tax to fund infrastructure improvements.

“We need dependable infrastructure if we’re going to attract new jobs and industry to our area,” he said. “As a farmer, I know only too well the importance of good roads to bring our crop to market.”

Gjersvik said the public has informed him health care is the most important local issue. He called access to affordable health care an “economic development issue.”

Gjersvik noted some of the highest health care costs in Minnesota are faced by people in District 27A, “and we must lower these costs.”

He said the district is also experiencing “disruption,” caused by Mayo Clinic Health System’s in-progress transition of most inpatient services from Albert Lea to Austin.

Gjersvik pledged that if elected, he will hold local forums to continue learning about health care issues residents are facing.

“We can also continue to recruit and welcome other providers, such as Mason City Clinic and its urology office that’s expanding to Albert Lea,” he said.

Gjersvik promised to partner with legislators to pass legislation requiring “greater transparency from medical providers that will enable people to compare costs and have the freedom to choose more affordable services.”

Gjersvik said he supports efforts to bring a second health care provider to Albert Lea, along with negotiating with Mayo and healing frayed relationships caused by the transition.

Gjersvik said one of his biggest concerns about Mayo’s transition is how much it impacts senior citizens, because they most often have inpatient stays and are usually on fixed incomes. He noted seniors would likely see higher costs for outpatient observation beds in Albert Lea, along with additional travel costs for hospital stays in other communities due to the transition.

Gjersvik, who served on the Mayo Patient and Family Advisory Council for 10 years, said the transition “shocked me,” and the community reaction highlighted the impact hospital services have on economic development and quality of life.

“Most of us were surprised that changes like this could be made to our local health care delivery system without first consulting community leadership,” he said.

Gjersvik said politicians need to view child care as a family and economic development issue and listen to people with direct insight into the crisis. He noted he met with a group of local child care providers this fall, and his campaign networked with the Southern Minnesota Initiative Foundation this summer to learn more about provider challenges and available support.

“Facing long hours and low profit margins, child care providers need to utilize all cost-saving services to start their business and stay in business,” he said.

Gjersvik said he supports legislation creating additional tax breaks for providers and establishing a formal mentorship for new providers. He suggested “revising excessive state regulations that can be overwhelming for some in-home providers.”

Gjersvik noted he supports utilizing a recent study by First Children’s Finance on changing child care needs in the region and continuing networking with providers to inform them on action he takes.

Gjersvik said the state must invest in recruiting and training technical workers by increasing spending for community and technical colleges and encouraging training partnerships with local high schools, such as apprenticeship programs.

“As a teacher I learned that over-emphasizing preparation for four-year colleges can be a disservice to over half our students,” he said.

To Gjersvik, “not all students are interested in going to a four-year college, and there are many stable, good-paying jobs in health care, manufacturing, construction and agriculture that are better prepared for with technical training that can start in high school and continue in community college or on the job.”

Gjersvik promised to “strengthen connections” between the six high schools in District 27A, Riverland Community College and local employers.

Gjersvik pledged to expand the Minnesota Student Loan Forgiveness Repayment Program if elected. The program targets health care professionals and teachers, “but expanding it to include technical workers could entice more students to pursue these trades and work in rural communities,” he said.

Gjersvik said “attractive housing” must be developed for new and existing workers.

“A nurse or teacher just out of college typically chooses to rent before buying a first home, and the 2014 Albert Lea Housing Study reports a shortage of high-quality, affordable rental properties attractive to young professionals in the area,” he said.

Gjersvik noted tax conformity legislation was meant to bring Minnesota’s tax code in line with recent tax cuts Congress passed and to simplify filings for taxpayers in the state.

“Unfortunately, the bill’s failure is a great example of how government fails us all when elected leaders refuse to work together, negotiate in good faith and keep the interests of all Minnesotans in mind while doing their work in St. Paul,” he said.

To Gjersvik, Minnesota House and Senate leaders and Gov. Mark Dayton share blame for the failure.

“They all failed to negotiate a positive, cooperative working relationship,” he said. “This was not a single-subject bill. Legislative leaders added other tax-related provisions and a version of emergency school funding to the bill, knowing Gov. Dayton would not approve of these additions and essentially begging him to veto it.”

Gjersvik pledged to work to pass a bipartisan, stand-alone tax conformity bill by the end of January.

Gjersvik said the state needs to “develop workable, data-informed solutions that honor the rights of law-abiding citizens to own firearms for hunting and self-defense while improving the safety of our schools and public spaces.”

“We can do it, but this will require both parties to share ideas and work together,” he said.

Gjersvik noted a bonding bill included $25 million in grant-based funding for school facility security improvements, adding schools must apply individually for the grants, “and as few as 50 schools could use up all of that money with maximum grant sizes of $500,000.”

“It’s a good start for those schools, but statewide it doesn’t go far enough,” he said.

“Any student who comes to school intending to do harm is clearly not well,” he said. “We must attend to these troubled students before they do something extreme.”

Gjersvik noted Minnesota has far less counselors in schools than recommendations formed by the American School Counselor Association, adding he supports legislation requiring and funding the hiring of more school counselors so the state more in compliance.

Gjersvik said local issues such as access to affordable health care must be solved by working across the aisle.

“Good leaders are good listeners first of all, and then they work to find common ground,” he said. “They seek to understand and then to be understood. Good leaders negotiate and compromise. I’ve done this all my life, whether a teacher, businessman or farmer, and I pledge to do the same if elected.”

Gjersvik said distracted driving is not acceptable, noting 16 states have passed hands-free legislation and there is extensive support statewide for such legislation.

He said the Federal Motor Carrier Safety Administration issued a national rule in 2012 restricting the use of hand-held mobile devices by commercial vehicle drivers to one-touch, hands-free use.

“If commercial drivers can adapt, I know the rest of us can, too,” Gjersvik said. “Most new cars today come equipped with one hands-free technology, and I would support a hands-free bill that includes a common sense provision for one-touch calls.”

Gjersvik said his experience and “direct connection with voters in the area” are his biggest strengths.

He noted he is a farmer with an ag economics degree. He has taught high school for more than 10 years and worked in ag software for more than 15 years.

“As a farmer, businessman, husband and father who has both gone to and taught in area schools, I have seen and worked on most issues faced by our district,” he said.

Gjersvik noted he has spent nearly his entire life in the district and worked with and knew people from “all walks of life in this community, and I respect their different voices.”

“I’ve knocked on thousands of doors in our district this summer and fall, and I hear what people are concerned about,” he said. “Not everyone agrees on every issue, but everyone is tired of political polarization. They just want government that works.”