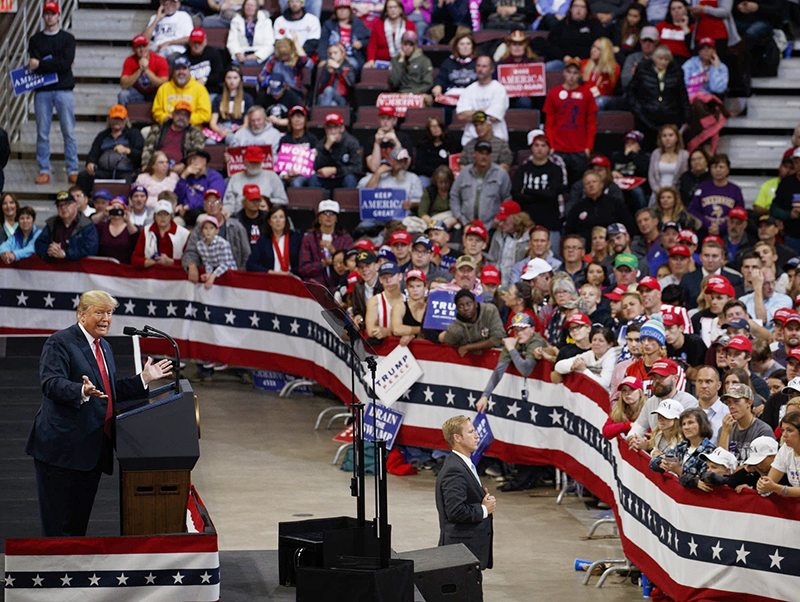 President stumps for Hagedorn, others in Minnesota

Speaking before a cheering crowd at a rally in Rochester, Trump praised Judge Brett Kavanaugh, whose nomination has faltered amid accusations of sexual misconduct. Of Democrats, he said, “Their rage-fueled resistance is starting to backfire at a level nobody has ever seen before.”

Added Trump: “Do we love it? We love it. Because people see what’s happening and they don’t like it.”

As Republicans face a tough midterm election cycle, Trump is trying to boost turnout. The GOP is hoping to fend off a Democratic effort to recapture the House of Representatives.

Trump landed in Minneapolis in the afternoon and headed to a fundraiser before traveling to Rochester, friendly territory in the traditionally liberal state, where Republicans are targeting two Democratic districts but playing defense in two GOP-held districts in the Minneapolis suburbs.

Stressing the stakes, Trump said, “On Nov 6, I need your vote, I need your support to stop radical Democrats and elect proud Minnesota Republicans.”

In a sustained attack on Democrats, Trump said they would raise taxes, increase regulations and stall economic gains. He slammed party leaders, including House Minority Leader Nancy Pelosi. And he accused the Democrats of desperately grabbing at power, saying, “They want to resist, they want to obstruct, they want to delay, demolish, they want to destroy.”

Trump earlier tweeted his support for Kavanaugh, who is accused of a sexual assault at a high school party, saying, “Due Process, Fairness and Common Sense are now on trial!” Trump has sought to use the Kavanaugh confirmation conflict to appeal to white men, arguing that the accusations are proof that innocent men could be unfairly targeted.

As Kavanaugh aggressively pushes back against allegations of misconduct, Trump mocked former Sen. Al Franken, a Minnesota Democrat, for quickly resigning over allegations of improper behavior.

The outcome in Minnesota could prove critical as Republicans seek to counter Democratic enthusiasm in the midterm elections.

The president campaigned for Republican Jim Hagedorn, who is seeking an open congressional seat in the 1st Congressional District, a Republican-leaning area Democrats have controlled for 12 years. Hagedorn, who came close to unseating the outgoing congressman in 2016, has been an unabashed supporter of Trump and hopes the publicity from the rally will help put him over the top.

Trump also appeared with Rep. Jason Lewis, who is facing a close re-election race in the Minneapolis suburbs. But Republican Rep. Erik Paulsen, who is also fighting to hold a suburban seat, did not attend, underscoring the president’s mixed popularity in the state.

The president’s sinking support in the suburbs has put both lawmakers in a tricky position against well-financed Democrats. But in a new memo, the White House argued that candidates who distance themselves from Trump will suffer this fall. Officials contrasted Lewis’ request to campaign with Trump with Paulsen’s efforts to keep his distance. The White House believes Paulsen’s rejection of Trump will sink his candidacy.

The White House memo acknowledges that Republicans are facing an enthusiasm gap, but suggests this is where Trump can make up the difference — for those candidates willing to take his help. Republicans who don’t talk about Trump or his accomplishments, the White House warns, will make a tough situation a whole lot tougher.

Trump has used campaign rallies to try to boost Republican turnout, encouraging the voters he drew to the polls in 2016 to support more staid traditional lawmakers. Both parties largely view the 2018 contest as a race to turn out party faithful rather than an effort to attract new voters.

Trump spent much of the rally ticking off what he views as key accomplishments, including jobs and economic gains and exiting the Iran nuclear deal. He also touted ongoing promises, including his pledge to develop a Space Force.

At the conclusion of the hour-plus speech, Trump made an impassioned plea, bemoaning the “Democrat politics of anger, division and destruction” and telling his supporters, “this is your time to choose.”

He added that his rise has been “the greatest movement in the history of our country” and predicted, “We are going to win, win, win.”

Albert Lea resident Harlan Kruger attended the event with his wife, Amanda, and two children, Heidi, 8, and Jackson, 5. The family arrived in Rochester at noon and were let into the event at 4:30 p.m.

He said he brought his family to “share this opportunity as a family and teach my children what it means to love our country and support our president.”

“We may never get this opportunity again, and I knew it would be a day my family will remember for their entire lives,” he said.

Kruger said lines outside the event spanned several blocks, and people were cheering, clapping and thanking first responders as they passed.

Kruger  called attending the event “an amazing honor.” He said the thousands of people in attendance were “friendly” and offered those waiting drinks and food.

“There’s a lot of enthusiasm, confidence, and just a lot of energy,” he said, adding there were “tons of people” there, with a few thousand more outside.

Seeing Trump speak and talk about the changes he has overseen over the last two years, such as trade deals and the economy. “I don’t support everything he says,” Kramer said. “I think some things get exaggerated, but for the most part it was good.”

Why did you want to go?

For the policies Trump has enacted, despite comments Kramer said are sometimes inappropriate.

Hoffman said Trump’s rally somewhat mirrored what seem like rock concerts on TV. “It was cool being close to people who were enjoying themselves,” he said.

It was “neat” when Trump introduced Minnesota Republicans running for Congressional seats and said positive things about them. “He took the time to acknowledge the politicians,” he said.

Why did you decide to attend?

”How can you say no when the president is 42 miles away?” 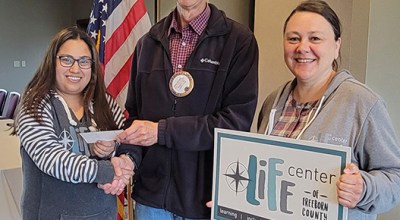