An Albert Lea woman charged in a domestic incident will not have to serve any additional jail time after pleading guilty to misdemeanor domestic assault on Tuesday in Freeborn County District Court. 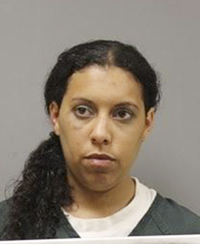 Judge Steven Schwab sentenced Caitlin Anne Nesje, 28, to 90 days in jail and gave her credit for 65 days served, releasing her due to time she already served. Minnesota law requires people serve two-thirds of their jail or prison sentence before being released.

Court documents state Nesje was charged after officers were dispatched July 22 to a residence in Albert Lea on a report of a domestic assault.

Upon arriving, they found the victim to have a facial injury, including a bloody nose, an abrasion to her right ring finger and a large bite mark on her left forearm.

Court documents state Nesje came out of a bedroom with a folding knife in her hand, with the blade open and exposed. She allegedly yelled at the victim while waving her hand up and down with the knife about 3 feet from her.

The charge Nesje pleaded guilty to did not include the allegation she used the knife, and she did not admit to doing so.

Nesje admitted they got into an argument and assaulted each other.

Nesje was charged with second-degree assault, but that count was reduced.