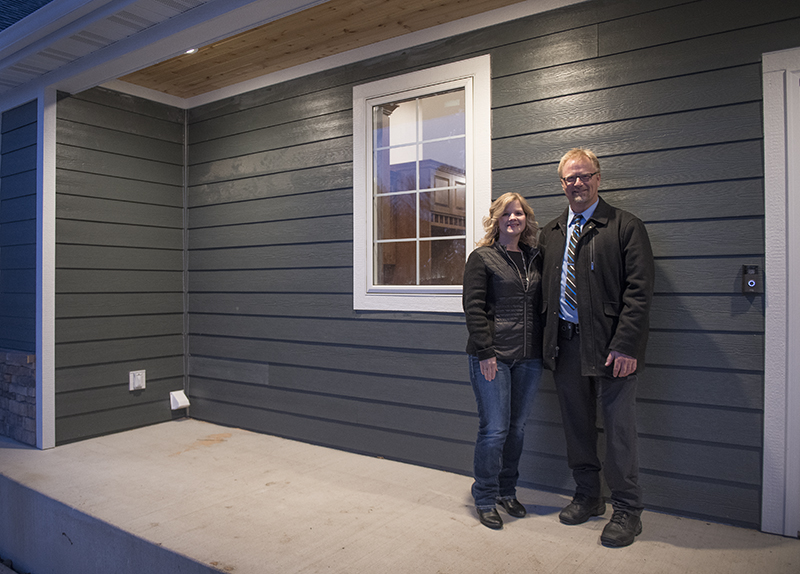 Todd and Heather Earl stand outside their rebuilt home in Clarks Grove, which they hope to move back into within the coming weeks. The family lost their previous house to a fire over a year ago. - Colleen Harrison/Albert Lea Tribune

Family who lost home to fire prepares to move back

CLARKS GROVE — Construction workers were working Tuesday afternoon on the main floor of the new home Todd and Heather Earl and their three children will move into next month.

Downstairs, Todd and Heather Earl recounted the journey the family has taken with the help of the community in the 12 months since their former house, which occupied the same space as the new home, was destroyed in a fire Nov. 12, 2017. 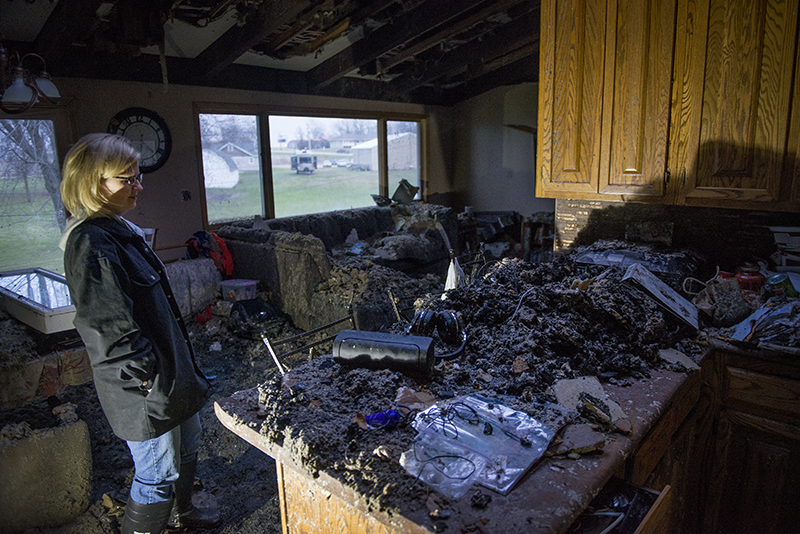 Following the fire, the Earls stayed with Jeremiah and Lindsey Mickelson — a couple who lost their Clarks Grove-area home during the 2010 tornado outbreak — for a few days before briefly staying at the former residence of Cole and Katie Pestorious.

They then began temporarily renting their current Tiger Hills house in December.

Todd Earl, Freeborn County Sheriff’s Office chief deputy, noted their rental already had items typically found in a house when they moved in.

“It’s just a crazy puzzle that just seems to … fit together,” he said. “I can’t picture how thankful we are and lucky we are to have had people help us out in the situations. It just worked for us. For being in a horrible situation, things just fell in place, one step at a time.”

Todd Earl noted the family has used local construction company Kjos Construction, a company he spoke highly of. The Earls used lumber from Geneva Lumber and local companies for plumbing and sheetrock services.

Heather Earl said D.J. Kjos of Kjos Construction has been empathetic while working.

A GoFundMe account set up for the Earls following the fire raised approximately $10,500.

Heather Earl said the community donated clothing for the family, including their three children —  Brendan, 12, Payton, 10, and Jordyn, 8.

“We didn’t have to think for weeks about getting clothing for our kids,” she said. “They brought stuffed animals, they brought toys, things that just made them feel like life was back to normal.” 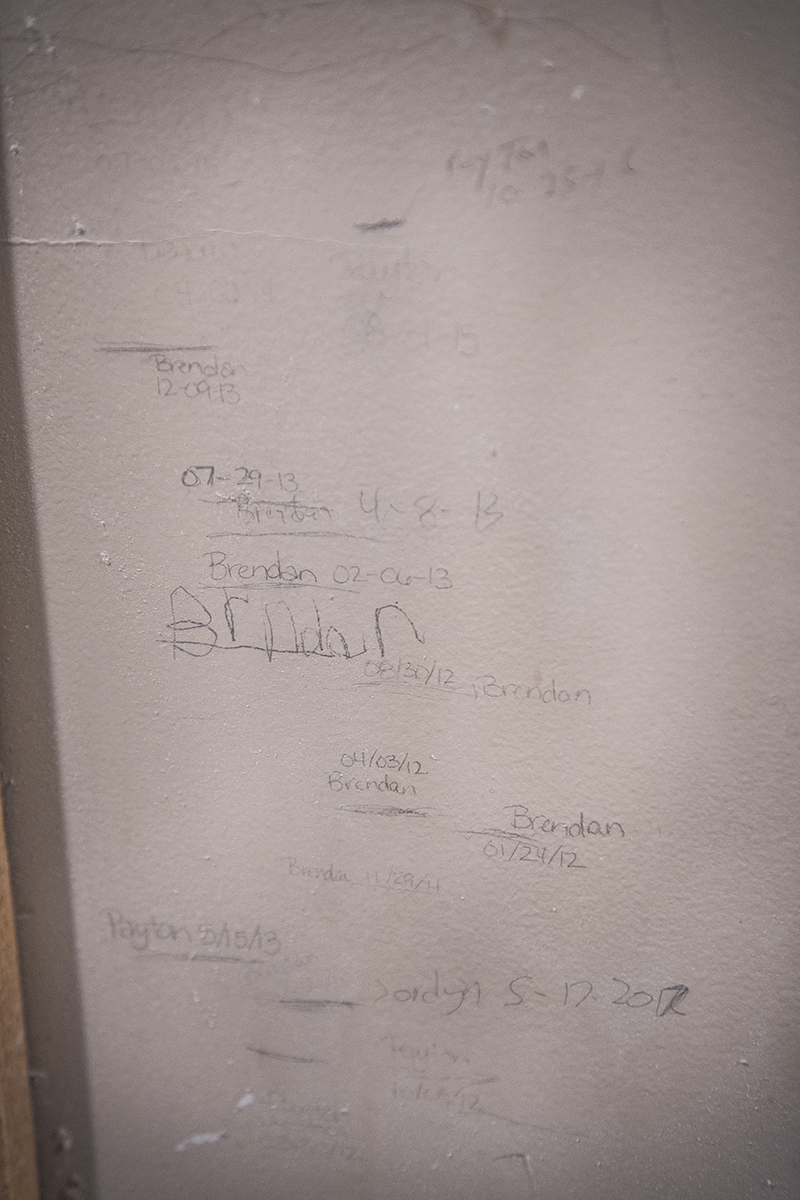 The Earls kept track of their children’s heights on a wall in their previous home that they lost to a fire a year ago. Todd Earl was able to cut out the piece of the wall with the measurements on it before the damaged home was demolished, as the family plans to incorporate it somewhere in their rebuilt home. – Colleen Harrison/Albert Lea Tribune

Todd Earl said it has been difficult to get their three children back into a routine.

“That’s been probably the hardest thing,” he said. “Getting the kids back into normalcy has been difficult.”

Earl said though construction on the approximately 2,800-square-foot home has taken a relatively short amount of time, the immediate aftermath of the blaze included problems with the insurance process.

“That was a huge headache for us,” he said.

“The county might tell you what your house is worth, but it’s not even close to what it’s going to cost to build a house nowadays,” he said.

Earl said the fire has forced him to have an understanding of the effects of post-traumatic stress disorder.

“I understand a little bit of that stuff that people go through, like the military vets that go through that,” he said. “I’ve never had this issue before. I’ve never looked at that switch over there and thought, ‘Holy cow, is that going to burn my house down? That furnace in there, what if there is an issue with that?’ My head is constantly thinking of this stuff now.” 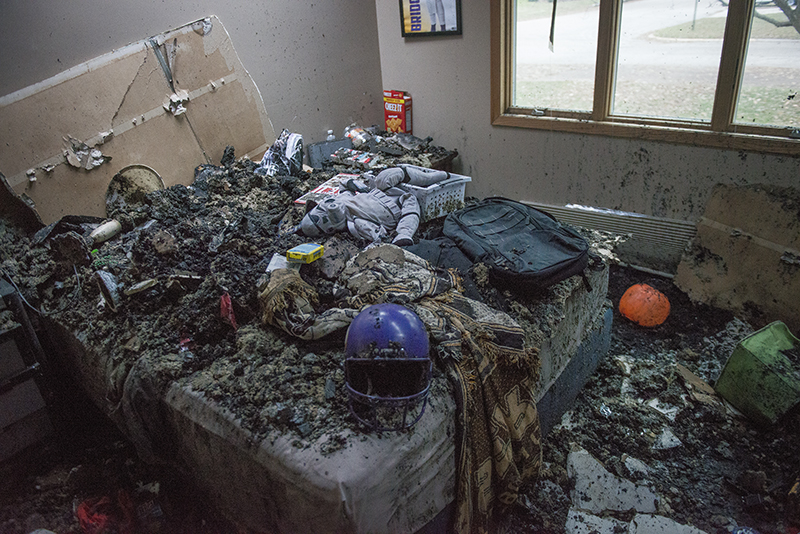 Over one year ago: Portions of the roof and other debris covered the bed and floor of Brendan Earl’s bedroom after the Earls’ home caught fire Nov. 12, 2017. – Colleen Harrison/Albert Lea Tribune

Heather Earl said she looks forward to moving her children into the new home.

The family plans to celebrate Christmas at their new home.

Todd and Heather Earl emphasized the blessings they said they received following the fire.

“We’ve tried to talk to our kids about that,” Heather Earl said. “This has just been a blessing. We’ve always had a place to stay. Everything just fell into place. God took care of everything along the way — the right contractor, the right place to stay, the community taking care of our kids.” 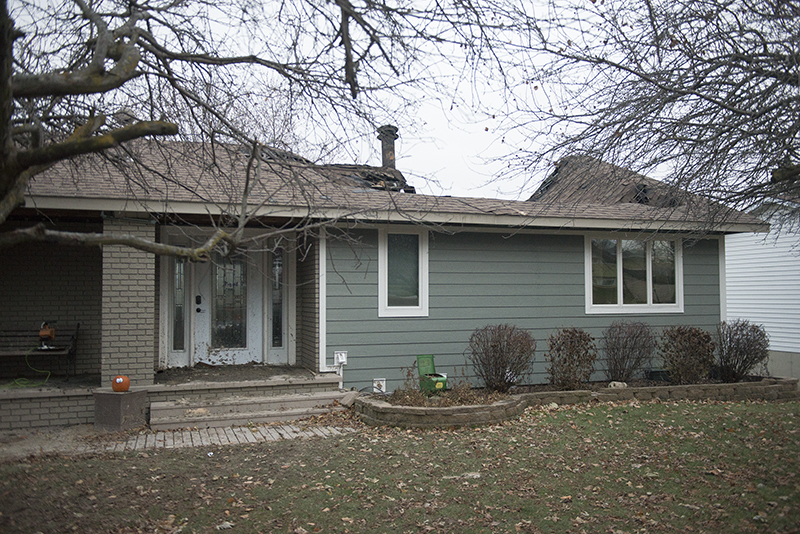 Over one year ago: A portion of the roof on the Earls’ previous Clarks Grove home collapsed after being damaged by a fire last year. – Colleen Harrison/Albert Lea Tribune