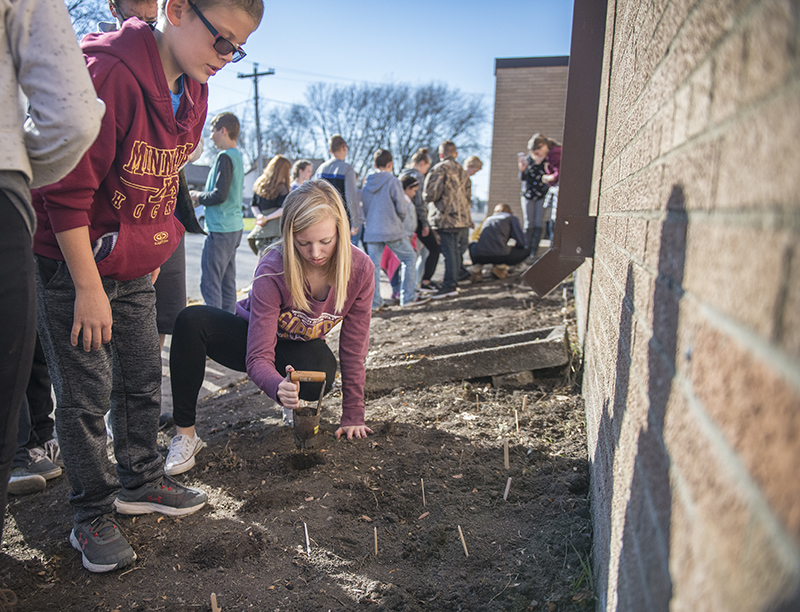 Members of the Teen Advocate Group planted tulips with fourth, fifth and sixth-graders Thursday at Glenville-Emmons Elementary School to symbolize their commitment to be drug- and alcohol-free. - Colleen Harrison/Albert Lea Tribune

GLENVILLE — Glenville-Emmons students learned of the necessities of leading drug- and alcohol-free lives this week through a national initiative that included a local speaker and displays of commitment from students and staff.

Glenville-Emmons Teen Advocate Group members decorated the school in signs symbolizing the need to remain alcohol- and drug-free Sunday for Red Ribbon Week, an initiative through the Red Ribbon Campaign, which began after Drug Enforcement Administration agent Enrique “Kiki” Camarena was tortured and killed in Mexico in 1985. The week was marked nationwide from Oct. 23 to Wednesday, but it was held this week in Glenville because of an FFA convention.

Eight members of the Teen Advocate Group planted tulips with fourth, fifth and sixth-graders Thursday at Glenville-Emmons Elementary School to symbolize their commitment to be drug- and alcohol-free.

The Teen Advocate Group consists of 17 eighth- through 12th-grade students and is in its first year of operation.

The school is focusing on different social issues throughout the year. The second quarter is expected to focus on stress management. The third quarter will feature mental health and the fourth will touch on healthy uses of technology.

“The students are planning it, the students are running it,” Sheena Possin said. “(They) have a say in what we kind of do so that they feel like they are more a part of it.”

Possin, a Teen Advocate Group advisor, said she picked social issues to focus on this year but expects students to play a larger role in the selection process next year. She has a co-advisor in the program, Sarah Gehring.

“We wanted it to be not too invasive into the school day but still there,” Possin said. 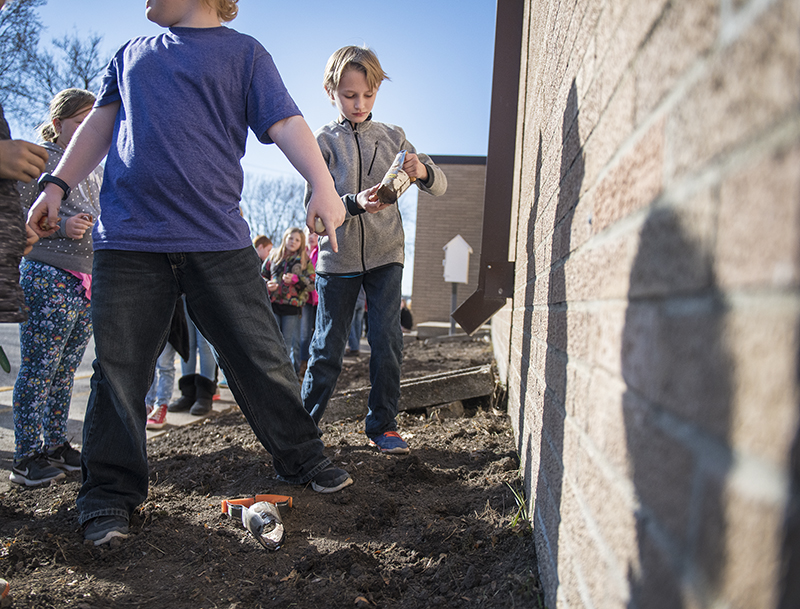 Glenville-Emmons students plant tulip bulbs Thursday along the outside of the school. – Colleen Harrison/Albert Lea Tribune

“They really got into it, and they were asking the law enforcement officers some really amazing questions just for their own knowledge,” Possin said.

“Having the awareness of, ‘it’s here,’ and ‘how do I say no’ and ‘how do I deal with those things,’” she said. “Students are faced with so many things in their life, that I think sometimes they just need a little extra guidance on certain topics, and I think that drugs and alcohol (are) one that all of them are faced with.”

Fountain Centers licensed alcohol and drug counselor Mark Wachlin discussed the addictions he has faced in his life during a visit to the school Friday.

“If it was there, I did it,” he said of the amount of addicting substances he tried.

He noted he has six driving while intoxicated offenses and started smoking cigarettes and drinking alcohol by the time he was 12 years old. Wachlin has been sober since 1989.

His 40-minute presentation included student interaction about their drug and alcohol use.

Wachlin stressed the need for students to use healthy coping mechanisms instead of turning to alcohol or drugs.

“It’s something that a lot of us don’t really talk about, but it needs to be talked about because we are still really young, and we don’t need to be affected by all of this stuff yet or at all,” she said. “I think it’s important to raise awareness that this stuff can harm you and it’s not something to be taken lightly.”

“It has brought a lot of light to all students’ eyes and see the dangers and harms to their body of drugs and alcohol or smoking or vaping,” she said.

“It hinders a lot of opportunities that I know kids that don’t do it have gotten to have,” she said of teenage drug and alcohol use. “I’ve gotten to be involved in so many awesome things, in sports and FFA and 4-H, and all of those things, and I’ve just learned that any kind of mixing with alcohol and drugs and smoking just doesn’t end well.”

Possin said she has not seen “extreme effects,” from student drug and alcohol abuse at Glenville-Emmons Secondary School.

“We’re trying to reach kids on more than just the education level,” she said. “There’s education, but we’re also trying to give them kind of that footing to get through the other tough stuff in life — so, having a well-rounded education, not just about arithmetic and core classes.”