A Hastings man charged with sexually assaulting a woman he knew in February in Albert Lea was sentenced to 8 1/2 years in prison Monday in Freeborn County District Court. 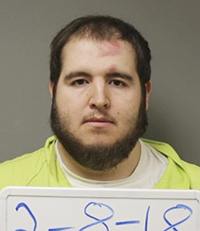 Alex Mathew Lafountaine, 22, was sentenced by Judge Steven Schwab after he pleaded guilty to fourth-degree criminal sexual conduct in September. He will serve his sentence at Minnesota Correctional Facility in St. Cloud.

Pending good behavior, Lafountaine is expected to serve five years and eight months in prison with the rest on supervised release.

After he is released from prison, Lafountaine will be on supervised release for the rest of his life.

Lafountaine’s sentence was recommended by the Department of Corrections and Freeborn County Attorney David Walker and fell within an expected range of seven years, three months in prison to 10 years in prison.

Walker noted a psychosexual evaluation indicated Lafountaine is at an above-average risk of reoffending and the Department of Corrections requested Lafountaine serve a long enough sentence to receive treatment.

Lawyer Jeremy Clinefelter requested Lafountaine receive a seven-year, three-month sentence, with nearly five years of that in prison and the rest on supervised release.

To Clinefelter, Lafountaine “continually expressed genuine, empathetic remorse” and is committed to rehabilitation.

Clinefelter questioned why Lafountaine needs to receive a lengthy prison sentence based on his pending lifetime placement on conditional release.

Lafountaine said he was sorry for his conduct and pledged to better himself and complete treatment.

Schwab noted the psychosexual evaluation favored and went against Lafountaine.

He said he was not going to recommend Lafountaine be civilly committed.

“I hope that you get the treatment you need,” Schwab said.