John “Joe” Narverud, 79, of Albert Lea passed away Monday, Dec. 3, 2018, at his home surrounded by his loving family. Joe passed away after suffering from kidney failure. 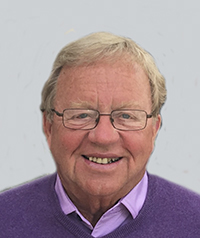 He was born May 30, 1939, in Albert Lea to John and Clara (Johnson) Narverud. Joe was a proud south-sider, growing up on the south side of Albert Lea and attending Ramsey School.

He was baptized and confirmed at First Lutheran Church, and referred to FLC as “the headquarters.” His faith was always very important to him throughout his life.

Joe graduated from Albert Lea High School in 1957. After high school Joe attended Mankato State University for two years. He joined the Army in 1960 and served in the Army Reserves for six years. Joe then attended and graduated from Minnesota School of Business in 1962.

Upon graduation, he began working at State Bank of Clarks Grove with his uncle, Reuben Johnson. He worked at the bank his entire career and celebrated 50 years in banking in 2012. Joe sold the bank and retired in 2014. He loved being a country banker and treasured his customers and the friendships he made over the years.

Joe met Sandy Smith on a blind date in 1960, and they were married July 13, 1963. They were best friends and celebrated their 55th wedding anniversary in 2018. They were blessed with three children, Susan, Julie and Jason, and seven grandchildren. He was a proud “Boompa” to not only his own grandchildren, but to their friends as well.

Joe’s greatest joy was spending time with his family and friends. His favorite times were spent talking smart, telling stories and laughing with family and friends at the bank, Green Lea Golf Course and Palm Island, hunting at the Narrows in Geneva and generally doing anything fun. Joe loved spending time at Ted Hellie’s farm helping Ted. He also loved music, especially the Doobie Brothers. People always knew Joe was near when they heard his trademark laugh! Joe was a friend to everyone and it was important to him to help others with his time and resources in his own quiet, humble way. He was one of the good guys.

Joe was preceded in death by his parents John and Clara Narverud; mother and fathers-in-law Geraldine (Elmer) Rayman and Marvin Smith; and many aunts and uncles.

If desired, memorials can be made to First Lutheran Church’s Peace & Power or Mayo Clinic Hospice.

God bless the memory of this great man!