Year in review: State stories of 2018 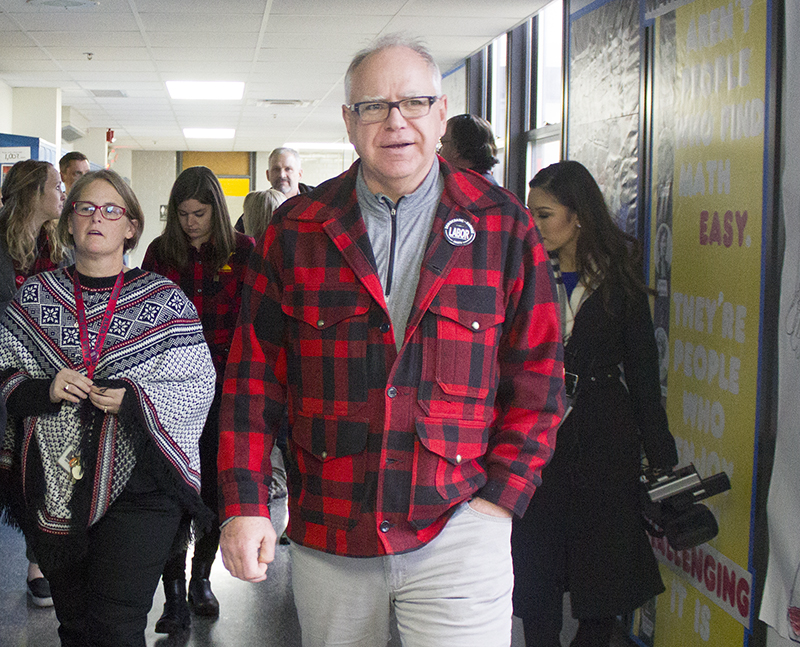 A look back at some of the top Minnesota stories of 2018:

In other races, U.S. Rep. Keith Ellison won the attorney general’s race despite an ex-girlfriend’s allegation that Ellison had dragged her off a bed — which Ellison said never happened. Ellison’s decision not to run again for Congress cleared the way for freshman Democratic state Rep. Ilhan Omar of Minneapolis, who made history in 2016 as the first Somali-American elected to a legislative seat in the U.S., to run for his U.S. House seat. Omar won, becoming the first Somali-American elected to Congress and one of two Muslim women winning U.S. House seats in November.

Former Gov. Tim Pawlenty tried a political comeback, running for his former office, but lost in the GOP primary to Johnson, a Hennepin County commissioner.

In a rare move, prosecutors charged a former Minneapolis police officer with murder in the 2017 fatal shooting of an Australian woman. Former officer Mohamed Noor faces charges of intentional murder, third-degree murder and manslaughter in the death of Justine Ruszczyk Damond. Damond, a 40-year-old life coach who was engaged to be married, was shot in July 2017 after reporting a possible sexual assault behind her home. Prosecutors alleged Noor acted recklessly when he shot Damond as she approached the officers’ squad car. Trial is set for April.

Prosecutors declined to bring charges against Minneapolis police who shot and killed Thurman Blevins in June after chasing him into an alley in north Minneapolis. Hennepin County Attorney Mike Freeman said the officers’ actions were justified because Blevins, who was black, turned toward police with a loaded gun.

Minnesota wrapped up its investigation into the 2016 death of rock star Prince without any criminal charges. Prince died of an accidental fentanyl overdose at his Paisley Park recording complex in Chanhassen outside of Minneapolis. After a two-year investigation, Carver County Attorney Mark Metz found that Prince took counterfeit Vicodin without knowing it, and said there was no evidence that anyone surrounding Prince gave him counterfeit Vicodin or knew he had it.

State pollution regulators issued the final major state permits for the proposed PolyMet copper-nickel mine. Opponents contend the proposed mine would threaten water quality downstream from PolyMet as far as Lake Superior. PolyMet says it can operate the mine without harming the environment while creating hundreds of badly needed jobs on Minnesota’s Iron Range.

And the federal Bureau of Land Management plans to formally renew mineral rights leases for the proposed Twin Metals copper-nickel mine near Ely. President Donald Trump’s administration lifted a roadblock in September.

Say it ain’t so, Joe. After a 15-year major league career — all with the Minnesota Twins — slugger Joe Mauer announced his retirement in November. The six-time All-Star cited his latest concussion in May, which sidelined him for a month. He ended his career with a total of 2,123 hits and went out in style, putting on his catcher’s gear to crouch behind the plate in a symbolic gesture in the Twins’ last game of the season. The Twins plan to retire Mauer’s No. 7 jersey next season.

Minneapolis welcomed fans for the Super Bowl at U.S. Bank Stadium in February. The Philadelphia Eagles beat the New England Patriots 41-33 for the Eagles’ first Super Bowl win. Justin Timberlake invoked the spirit of Prince by projecting an image of the late superstar on a giant screen during the halftime show. The Super Bowl was trouble-free, but the bigger question was what might have been. The Minnesota Vikings almost made it to the big game, thanks to the “Minnesota Miracle.” Case Keenum hurled the ball on the final play and Stefon Diggs leapt to catch it, running into the end zone to beat the New Orleans Saints 29-24 on Jan. 14 and send the Vikings to the NFC championship game. But the Eagles beat Minnesota 38-7 to deny the Vikings’ bid to become the first hometown team to host the Super Bowl.

In June, a raccoon became an internet sensation as it crawled up a 25-story office tower in downtown St. Paul. Nearby Minnesota Public Radio followed the critter’s climb and branded it #mprraccoon. The raccoon was lured into a trap with cat food and set free.