Albert Lea ties for record low temperature of 29 below 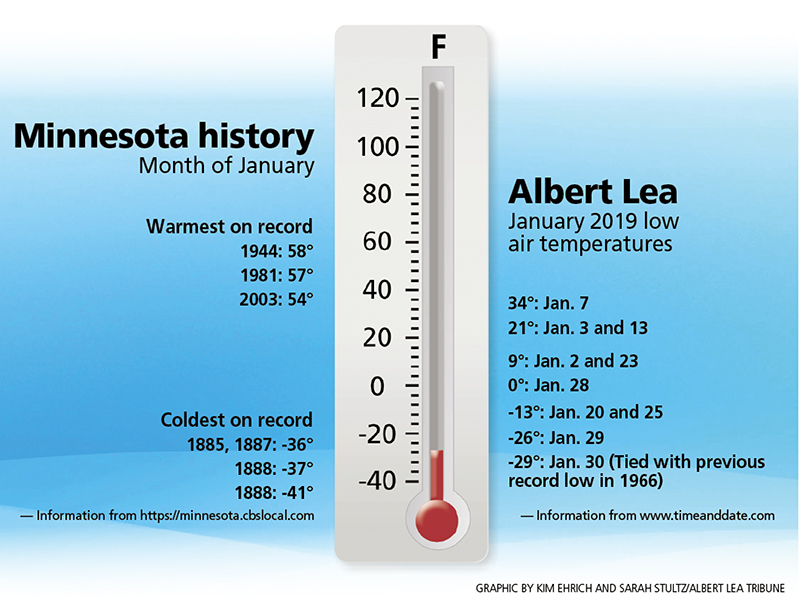 Frigid wind chills to continue for 3rd day; relief on the way

Bitter cold wind chills were expected to continue Thursday, leading to school delays and cancellations for a fourth day.

According to the National Weather Service, wind chill values were expected to remain near or below 35 degrees below zero overnight Wednesday with winds decreasing. Despite lower winds, the air temperature was expected to reach 30 below zero.

Albert Lea on Wednesday morning tied for the record low temperature of minus 29 in 1966. Combined with wind, the wind chill reached 55 below zero.

The bitter cold is the result of a split in the polar vortex that allowed temperatures to drop much farther south than normal. That meant temperatures in parts of the Midwest were lower Wednesday than in parts of Antarctica.

The U.S. Postal Service took the rare step of suspending mail delivery across much of the region. More than 1,600 flights were canceled at Chicago’s airports Wednesday, including more than 1,300 at O’Hare International Airport, one of the nation’s largest airports.

Freeborn County reduced its services under its emergency protocol, and other businesses closed. Many people stayed home.

Those who did have to venture out of their homes were sometimes met with cars that wouldn’t start or that encountered problems on their way to their destinations. Other reports were given on social media of residents whose furnaces were challenged with keeping up with the extreme temperatures.

The Albert Lea Salvation Army was opened as a warming center from 8:30 a.m. to 4:30 p.m. Wednesday and was expected to be open the same hours Thursday. As of 1:30 p.m., the organization had offered relief to a half dozen people, according to Maj. Sandy Hunt.

The Weather Service stated the wind chill warning was set to end at 9 a.m. Thursday.

Light snow is expected to fall after noon, with the high rising to near minus 4 degrees. New snow accumulation of less than 1 inch was possible.

Temperatures are forecast to rise above zero on Friday with a high forecast near 21. Wind chill values could be as low as minus 19 with south wind of 5 to 10 mph.

On Saturday and Sunday, temperatures are expected to rebound above freezing, though a slight chance of drizzle is possible both days. A high of near 37 is forecast for Saturday, and a high of 45 could happen Sunday.

More freezing drizzle and snow is expected the first half of next week.

The impact of the frigid cold, by the numbers

MINNEAPOLIS — A look at how this week’s snowstorm and bitter cold have affected the United States, by the numbers:

139 million: Roughly the number of people in the U.S. who were under a wind chill advisory or wind chill warning as of midday Wednesday, according to information from the National Weather Service.

10: Number of states where mail delivery was suspended either statewide or in part due to dangerously cold conditions, according to the U.S. Postal Service. The affected states include Nebraska, North Dakota, South Dakota, Minnesota, Iowa, Wisconsin, Illinois, Indiana, Michigan and Ohio.

370: Number of blood drives sponsored by the American Red Cross that had to be cancelled nationwide due to winter weather. The Red Cross says these cancellations will lead to an estimated 11,600 in uncollected blood donations for the month of January, based on the expected number of potential donors at cancelled drive locations.

1: Number of zebras reported dead as a result of the extreme cold. Authorities in northern Indiana say a zebra was found dead Wednesday at a farm outside Delphi, about 65 miles (105 kilometers) northwest of Indianapolis. Another zebra on the farm survived.

6: Number of states that saw colder weather than the South Pole Wednesday. According to AccuWeather.com, the South Pole station registered a low of negative 26 (minus 32 Celsius) Wednesday morning. At that time, North Dakota, South Dakota, Minnesota, Wisconsin, Iowa and Illinois all had colder weather. It is the summer season in the southern hemisphere.

94: The number of competitors who dropped out of the Arrowhead 135, an ultra endurance test in northeast Minnesota that requires entrants to cover 135 miles on foot, ski or bicycle. Fifty-two people — or roughly 36 percent of participants — completed the race that ended Wednesday. The average finish rate for participants is less than 50 percent.