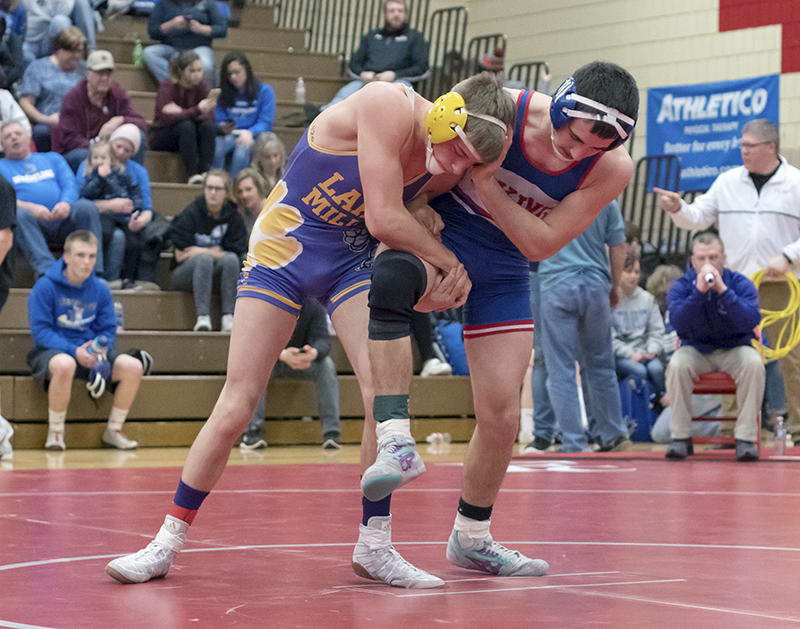 Northwood-Kensett junior Caden Schrage and Lake Mills senior Kyle Beery wrestle in the semifinal match at 132 pounds. Schrage went on to win the match by pinfall in the third period. - Lory Groe/For the Albert Lea Tribune

The Lake Mills and Northwood-Kensett wrestling teams traveled to Forest City on Saturday for the 16-team Top of Iowa Conference tournament.

The Bulldogs scored a solid 214 points, but it was not enough to keep pace with Osage, which scored 237.5. The Bulldogs finished in second and the Vikings came in 12th with a team final of 81.5.

“We wrestled well at times today, but the semifinal round sank us,” said Lake Mills head coach Alex Brandenburg. “The round started going poorly early, and it just snowballed.”

After the semifinals, the Bulldogs wrestled much better in the final two consolation rounds, but were too far behind to ever bridge the gap. Senior Caiden Jones captured his second conference title and was the lone Bulldogs champion.

“Caiden had a great tournament and widened the gap on his opponents from the last time he wrestled each of them.” Brandenburg said.

The other two Bulldogs to make the finals were sophomore Elijah Wagner and senior Max Johnson. 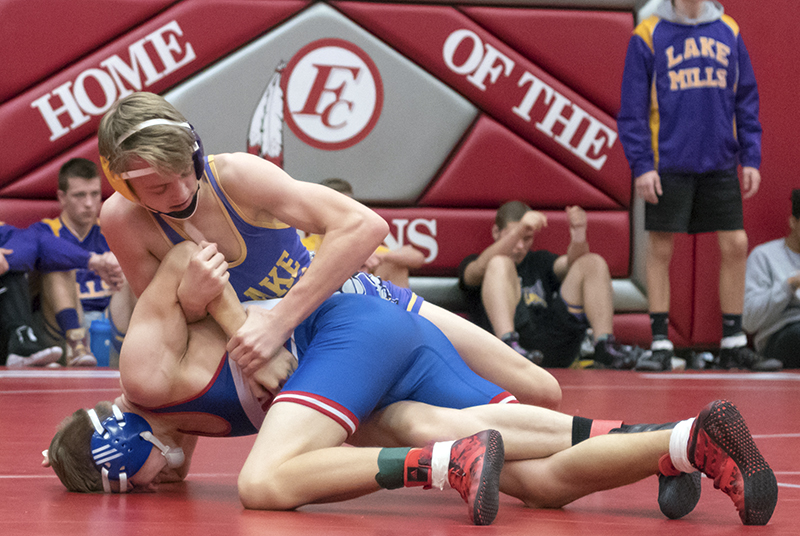 “Elijah wrestled very well today as he almost beat one the best wrestlers in the state,” Brandenburg said. “Max was so close to winning a title, losing in the last seconds.”

Despite not having many kids in the finals, Lake Mills was able to score a lot of points and stay in the team race because 13 wrestlers placed in the top seven of their respective weight classes. Despite the disappointment of not repeating as tournament champions, the Bulldogs look forward to the next few weeks.

“Although we are not happy with how we performed today, it is good to use this as motivation,” Brandenburg said. “It’s time to regroup, dig deep and wrestle better during the postseason.”

Two Vikings were able to place in the top three in their respective weight classes. Junior Caden Schrage took second place and was the top finisher on the team. Schrage pinned his way to the finals, where he lost in a tough battle via a 8-4 decision.

Junior Giddeon Rollene placed third at 160 pounds. He picked up three pinfalls on the day with his only loss coming to Lake Mills’ Wagner in the semifinal round.

The next highest finisher for Northwood-Kensett was freshman Drake Tiedemann, who finished in fourth place at 138 pounds. Tiedemann picked up two early victories before falling in the semifinals and consolation match.

Senior Samuel Kliment took seventh place at 152 pounds, winning two matches by fall and one by a 15-0 technical fall.

Junior Brody Branstad and freshman Tyler Mills each took home an eighth-place finish at 170 pounds and 145 pounds, respectively. Branstad went 3-2 on the day with one pinfall and Mills 2-3 with one fall and one bye.

Next up for both the Vikings and Bulldogs will be their sectionals tournament Saturday at West Hancock High School in Britt, Iowa. The top two place-winners in each division will move on to districts for a shot at a state tournament berth.