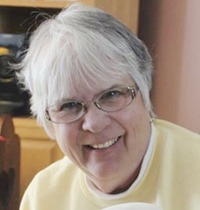 Debra Sorenson was born Nov. 7, 1952, in Albert Lea to Henry and Lucille (Ashley) Sorenson. Debbie, as she was known to most people, grew up in Glenville and graduated from Glenville High School. Debbie was blessed with two children she adored, Paula and Robert.

She was a business owner in Albert Lea before moving with her children to Oregon in 1982. There, she worked as a deputy with the Marion County Sheriff’s Office and was very proud of her accomplishment being one of a few women deputies at that time.

On Jan. 12, 1990, Debbie married her love, Dean Beighley, in Salem, Oregon. The couple had nearly 29 wonderful years together. After a medical issue forced her to retire from the Sheriff’s Office, Debbie and Dean returned to Albert Lea to be with family. In Albert Lea Debbie is most known for her volunteer spirit. There are too many places to name, but some of her favorites were the Senior Center, Salem Lutheran Church, the Moose Club, Ducks Unlimited and the Don MacBeth Memorial Jockey Fund.

When Debbie wasn’t volunteering, you could usually find her socializing with friends, crafting, shopping or playing bingo. Most importantly, Debbie dedicated her life to her children. Her most cherished title was grandma.

She is preceded in death by both parents, Henry and Lucille Sorenson; and father- and mother-in-law Elvin and Dorothy Beighley.

Memorial services for Debra K. Beighley will be at 11 a.m. Tuesday at Salem Lutheran Church in Albert Lea. The Rev. Erica Cunningham will officiate. Visitation will be from 5 to 7 p.m. Monday at Bonnerup Funeral Service in Albert Lea as well as one hour before the service at the church. A private family burial will take place at Hillcrest Cemetery.

Blessed be her memory in the sound of laughter.