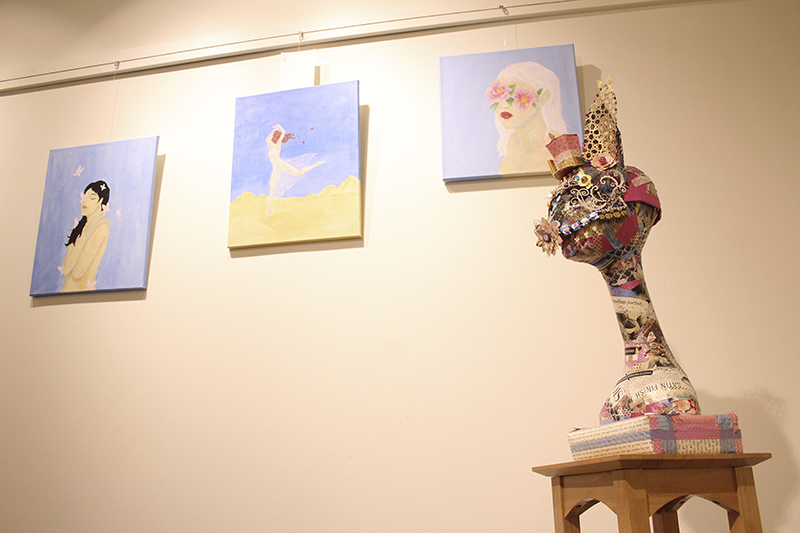 Marla Klein's series based on Kim Chun Soo's poem, "Flower," plays on the description of movement in the piece. The sculpture is "The Mask You Wear," created by Ameial Myles out of fashion magazines. Sarah Kocher/Albert Lea Tribune

The written word receives new life at the Freeborn County Arts Initiative thanks to a show celebrating interaction between art forms.

“We’re excited to see what, the reason why people chose what they did and what inspires them,” Klein said.

The Arts Initiative board had the idea for a few years now, and Klein said now seemed like the right time to make it happen.

“We just really like the theme a lot,” she said.

Artists have taken the prompt in their own directions in creating approximately 25 pieces spanning mediums from paint to textile to photography to sculpture and more, all on display starting Saturday.

Three of those pieces include acrylic on canvas creations from the mind of artist Haim Park. This is Park’s first time displaying artwork at the Freeborn County Arts Initiative. The trio, “Campanella,” “Ceaseless” and “The Coronation,” are all inspired by a Korean poem whose title roughly translates to “Flower,” Park said. It’s a short poem, but it speaks of an ungendered figure — whom Park interpreted as a female — who, before her name was called, was just a movement, then became a flower. 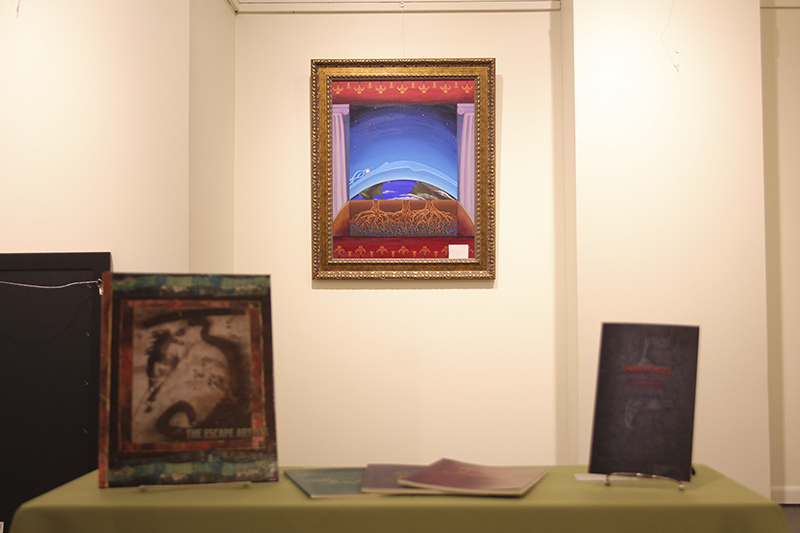 As the show asks artists to consider inspiration from literature, the show also includes books created by artists. Two of these books are Susanne Crane’s, whose painting “Pillars of the Earth” is based on a Ken Follett work. Sarah Kocher/Albert Lea Tribune

It’s about movement. The word is onomatopoeic in Korean, and usually associated with small animals, like the fluttering of a butterfly’s wings.

“Campanella” is the first piece Park painted. She typically works with ink.

“I read it and I just (thought), ‘Ah, I feel like this would be a perfect painting I could present my ideas with,” Park said.

The trio of pieces joins other works in Park’s repertoire inspired by literature. Some pieces were for her own frame of reference — buildings sketched out to help Park visualize descriptions in Ayn Rand books — while others were watercolors based on song lyrics.

Klein said the Freeborn County Arts Initiative is excited to showcase more artists from across the Midwest through this show and future shows.

“I’m excited, personally, for this show, because I get to see what inspires other people with their artwork,” Klein said.

The Freeborn County Arts Initiative is open from 1 to 4 p.m. Saturday. The gallery will host a closing artist reception from 5 to 7 p.m. March 2.

What: “Theatre of the Mind”

When: The show opens Saturday, with a closing artist reception from 5 to 7 p.m. March 2.