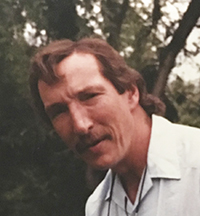 Fred was an avid outdoorsman, enjoying camping, fishing and howling with wolves when exploring the great outdoors and becoming one with nature.

Fred is preceded in death by his parents Helen Dahlke and Frank Dahlke; brother, Joe Dahlke; and nephew, John Dahlke.

Fred was kindhearted and loved animals. He demonstrated his compassion through his caring of his pets Pepper and Shadow.

Fred will be greatly missed by his family and friends. Blessed be his memory.