A Shakopee man who was more than three times the legal blood alcohol limit when he reportedly led officers on a short, low-speed chase was sentenced to electronic home monitoring and 30 days in jail Thursday in Freeborn County District Court. 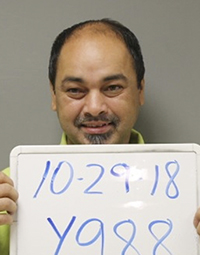 Bhuban K C, 47, was sentenced after he pleaded guilty to second-degree driving while intoxicated in November.

C is expected to complete electronic home monitoring before reporting to jail.

Freeborn County Judge Ross Leuning sentenced C to 365 days in jail, and 335 days were stayed. He was given credit for two days served.

Leuning placed C on probation for four years. Two years are expected to be supervised, and two will be unsupervised.

While on probation, C will be expected to not use alcohol or controlled substances with the exception of prescribed medications, submit to random testing and daily testing, and follow other court requirements.

Court documents state C was charged after an Albert Lea officer noticed a Chevy Trailblazer make a left turn onto Front Street from Broadway Avenue at a relatively quick pace Oct. 29 to try to beat a train to the intersection.

The officer attempted to pull C over, but he allegedly did not pull over, traveling west on Front Street at speeds of around 20 mph in a 30 mph zone.

Near the intersection of Front Street and Fourth Avenue, court documents state the vehicle’s speed increased to approximately 40 mph before making a left turn into the Korner Mart gas station. C was then taken into custody.

C showed signs of intoxication in administered tests and was found to have had a .27 blood alcohol content, court documents state.

C’s driving privileges were revoked at the time of the incident. Court documents state he had two previous DWI convictions.

C was charged with felony fleeing a peace officer in a motor vehicle and misdemeanor driving after revocation, but those charges were dismissed.