Man sentenced to probation for threatening county employee with hammer 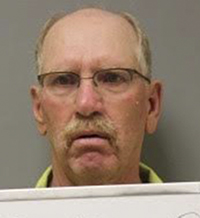 Brian George Boettcher, 64, was sentenced after he pleaded guilty to felony threats of violence in October. He was sentenced to two days in jail and was given credit for two days served.

While on probation, Boettcher is expected to not use or possess firearms, ammunition or explosives, follow state and federal criminal laws, undergo cognitive skill training, follow recommendations of a mental health evaluation and meet other court requirements.

After the employee took a picture of Boettcher, turned off his lawnmower and exited it, Boettcher pulled out a claw hammer from the back of his van and approached him.

“(Boettcher) appeared enraged, and as he approached (the) victim, he swung the hammer as to strike the front of the tractor (the) victim was in,” court documents state.

He allegedly climbed up the steps of the tractor leading to the employee, hovering over him and pulling down the tractor door, yelling at him after becoming angry that the victim was mowing grass on the road.

Boettcher was later arrested during a traffic stop.

Boettcher was charged with second-degree assault with a dangerous weapon, but that charge was dismissed.