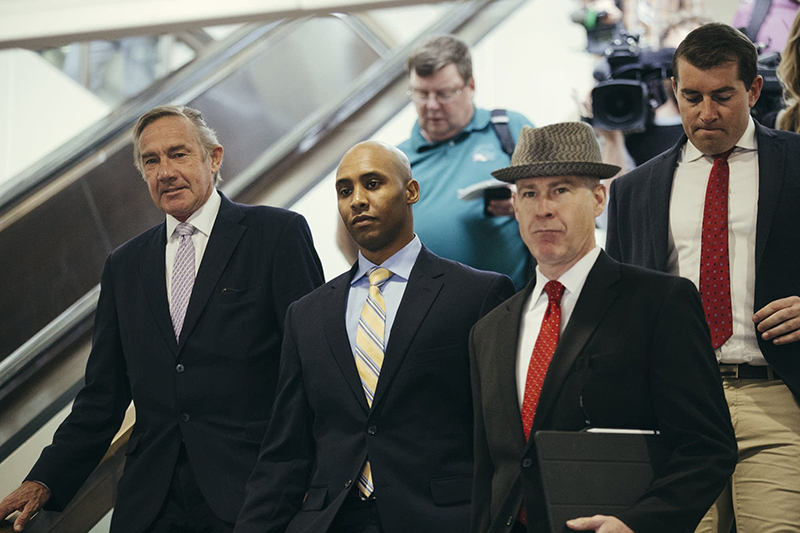 Former Minneapolis police officer Mohamed Noor, flanked by attorneys Peter Wold, left, and Thomas Plunkett, right, is trailed by reporters from the U.S. and Australia as he leaves the Hennepin County Government Center in Minneapolis in May 2018. - Evan Frost/MPR News

Attorneys for a former Minneapolis police officer charged in the shooting death of Justine Ruszczyk did not show up for an inspection of a police vehicle Friday after a judge approved their request to do so.

Mohamed Noor’s attorneys Thomas Plunkett and Peter Wold had requested access to a squad car for testing and analysis as they build a defense on behalf of Noor, who’s facing second-degree murder, third-degree murder and second-degree manslaughter charges in connection with the July 15, 2017 shooting.

Ruszczyk, also known as Justine Damond, had called 911 to report a possible assault. Noor was riding in the passenger seat while his partner Matthew Harrity drove through the alley behind Ruszczyk’s southwest Minneapolis home. Authorities say Noor shot Ruszczyk through the open driver’s side window.

According to a court filing last week, Noor’s attorneys said state investigators have used more than one squad car for testing and “failed to preserve the squad car used in this alleged offense.”

They requested access to a police squad to perform “independent tests” on Dec. 28, adding that the moon would’ve been in the same phase as it was on the night Ruszczyk was killed.

Hennepin County District Judge Kathryn Quaintance granted the request for a 6 p.m. to 10 p.m. window at the 5th Precinct but prohibited the defense from interviewing Minneapolis police representatives during the inspection on any topics unrelated to the squad car.

Minneapolis police spokesperson John Elder, however, said the testing did not take place on Friday. He noted that any other requests would have to be made through the courts.