The world of robotics 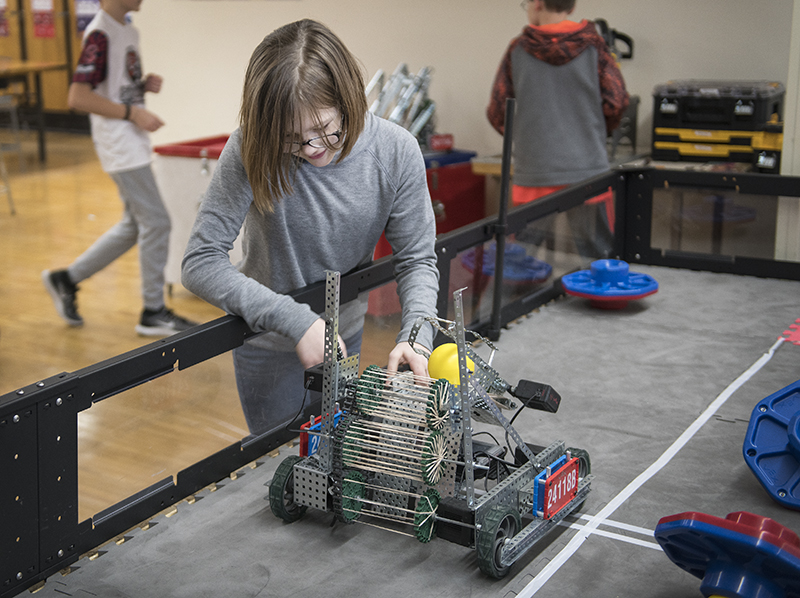 Southwest Middle School sixth-grader Ruby Mykkanen sets up one of the robots heading to the state tournament next weekend. - Colleen Harrison/Albert Lea Tribune

Two Southwest Middle School robotics teams have been selected out of 60 across the state to participate in a middle school state competition next weekend in St. Cloud.

The school also had Blue and Silver teams. All four squads consisted of 10 sixth- and seventh-graders.

The coach said some of the game’s harder elements came into play by scoring points on the top two flags on the game field and by stacking plastic caps onto poles placed around the game field’s perimeter.

“The Cyberian White team elected to not go after the high flags, and instead chose to focus their build on stacking the caps,” Egner said. “Their robot is equipped with a scissor lift system that allows their robot to expand while holding a plastic cup and safely securing it on a perimeter pole 24 inches in the air, where it is much harder for rival teams to get at.”

He said the Cyberian Red team “got together and decided that lure of hurtling plastic balls across the field was more their style.”

“The team looked at the scoring potential and determined that their strategy was going to focus more on the high flags — 32 inches and 46 inches off the ground — so they built a conveyor system out of gears and rubber bands that acts as an elevator for the plastic game balls.

“The game balls are dropped into a launcher that can hurtle the ball at the elevated targets as far away as 12 feet.”

According to Burke, “there’s a lot of details that go into it, and so the entire team is constantly working together, checking themselves against the rules.” 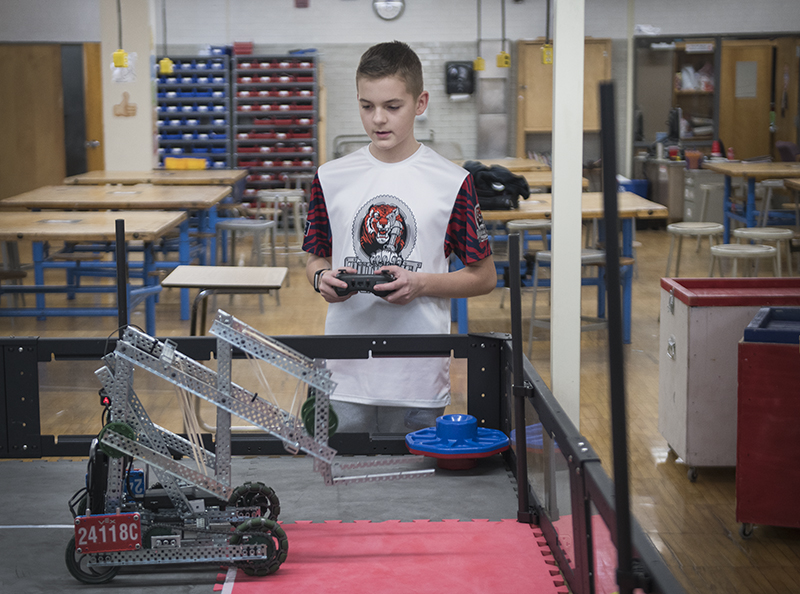 Southwest Middle School sixth-grader Maxx Richards does a demonstration with one of the robots heading to the state tournament next weekend. – Colleen Harrison/Albert Lea Tribune

Participant Jakob Nelson said the bots “are built around certain rules and how the game is played.”

“Every year the game is different, and this year they happened to put up flags, posts, caps, balls, and I guess you call those platforms,” he said. “We design every robot differently according to what we want it to do.”

The student-made and programmed bots reportedly took about 50 hours to make and must be 18 inches tall and 18 inches long.

The season began in August and has included tournaments with Austin, Windom and Southland school districts, and Egner hopes Albert Lea can host a tournament one day.

Students have been meeting on a daily basis for two to three hours to work on the competition.

“Many of them have not had any exposure to robotics or mechatronic principles prior to the club,” Egner said.

There is a practice field in place at Southwest Middle School so participants can compete similarly to a tournament.

Nelson said he was “mind-blown” that his team made it to state.

“When our team started, we started our first competition in last place,” he said. “We ended up finishing in last … so to go from last to state is pretty cool.”

Participant Kalia Register said she thought it would be cool to help build and code a robot.

“I’ve never really built anything, and I didn’t have any of the parts,” she said.

“This helps to set them up with their coding and the programming in the building,” he said. “It’s a different system but similar concepts.” 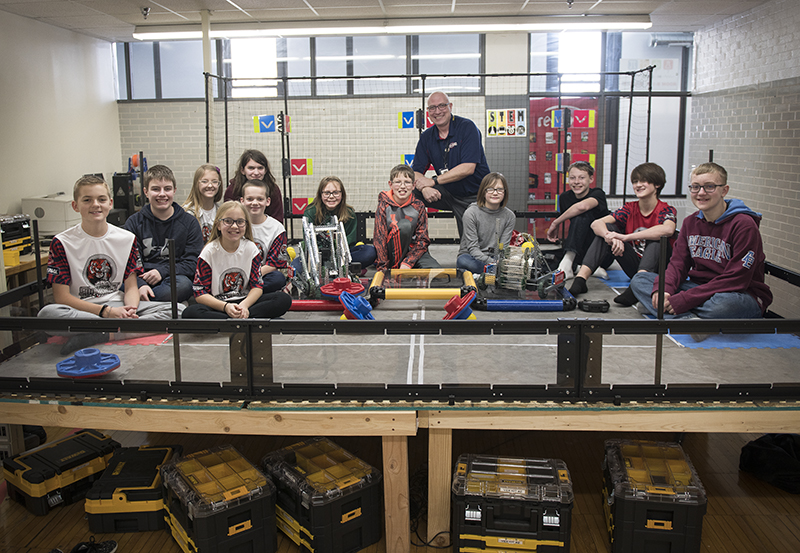