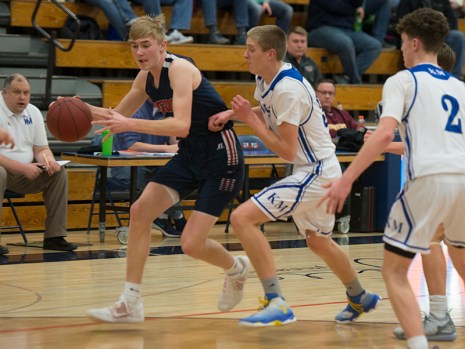 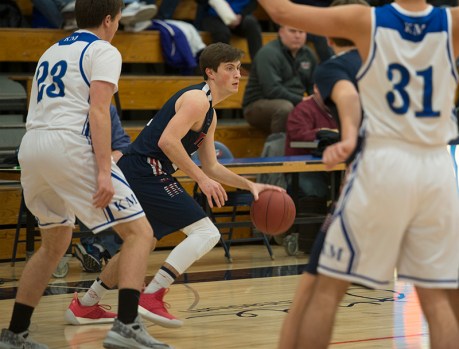 Senior Spencer Doyle was one of 10 players who scored for the Tigers in the 66-60 win over the KoMets. - Tyler Julson/Albert Lea Tribune 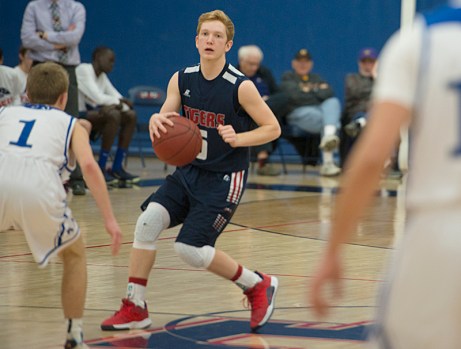 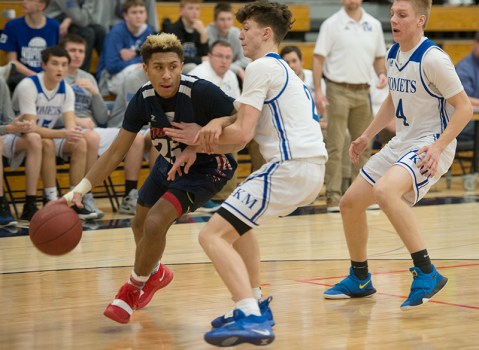 Albert Lea junior JJ Mucha-Owens gets around a defender Tuesday night at home. Mucha-Owens had 11 points in the 66-60 win over Kasson-Mantorville. - Tyler Julson/Albert Lea Tribune 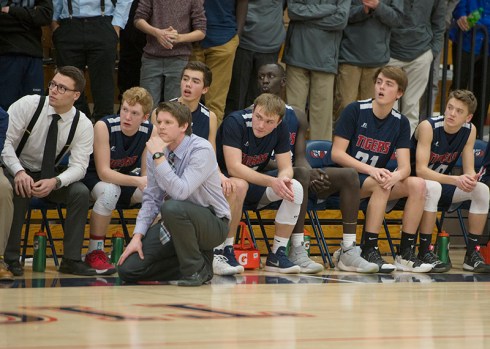 Head coach Luke Novosad and the rest of the Tigers bench looks on as they near their first victory in nearly three years. - Tyler Julson/Albert Lea Tribune 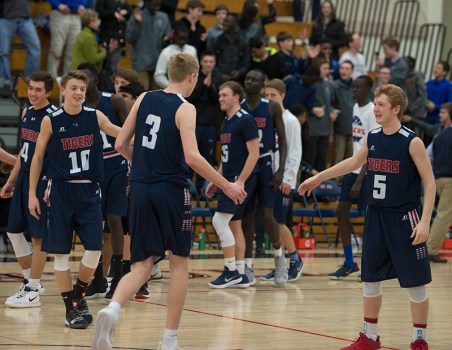 The Tigers celebrate as they break the losing streak that dated back to Feb. 1, 2016. - Tyler Julson/Albert Lea Tribune

The Albert Lea boys’ basketball team picked up a big win against Kasson-Mantorville on Tuesday night, snapping a losing streak that dated back to Feb. 1, 2016.

Despite a small scare to open the second half, the Tigers played a stellar overall game to eventually down the KoMets, 66-60.

Junior Koby Hendrickson got the game started in a big way for the Tigers, converting on an and-one opportunity and an open three-pointer, scoring the first six points of the game for the Tigers.

Shortly after, junior Andrew Willner hit another long range shot to give the Tigers the lead, one they would not relinquish for the rest of the game.

Albert Lea continued its reign from three-point land with back-to-back threes from junior Caden Gardner, widening the Albert Lea lead to 12 points at the midway point of the half.

The Tigers played a phenomenal game below the basket and on the defensive side of the court, recording a number of takeaways that led to baskets and pulling down and converting second-chance rebounds.

Ball movement was also a big factor in the Tigers’ first-half success. The unselfishness in the passing game led to eight different players scoring for the Tigers in the half.

At the halftime break, Albert Lea led by a comfortable 10 points, 36-26. Leading the way was Hendrickson with nine points; senior Dylan Scherff was right behind with seven and Gardner had six. Junior Connor Veldman had four, while Willner and juniors JJ Mucha-Owens, Logan Howe and Chay Guen combined for 10.

Kasson-Mantorville came out to a strong opening in the second half, trimming the Albert Lea lead to just three points while the Albert Lea offense remained stagnant.

The KoMets went on an 11-4 run to open the half, before they were quieted by deep shots from Howe and senior Spencer Doyle. The Tigers climbed back out, leading by as many as 12 points.

Just when it looked like Kasson-Mantorville might start to climb back into the game, senior Drake Dawson hit a three that shut the run down. Albert Lea went 6-of-8 from the free throw line when it came down to the end of the game, ending the nearly three-year long losing streak.

“It does give us a bit of energy,” said head coach Luke Novosad. “I think it solidifies a lot for those boys. They’ve had it within them, they’ve always been winners, and they’ve always worked their tails off. I told them in the locker room, ‘This is what we expect. No matter who we’re playing, we should expect to win.’ Now we need to go get (Rochester) Mayo on Friday.”

It was outstanding teamwork again in the second half that allowed the Tigers to pull away from the KoMets. Again eight different players scored in the second half, with Doyle and Dawson adding their contribution to bring the total to 10 different Tigers getting on the scoreboard.

“We’ve really stressed the unselfishness,” Novosad said. “We notice when we struggle offensively, our flow stops because we’re stopping the ball and not looking for each other. We always say ‘Let the ball find you, because your teammates will get you open.’ We have good shooters on this team.

“Tonight it was nice to see Drake Dawson hit a shot big with about three or four minutes to go, that put us up by nine. It was a huge momentum boost for us and it was great to see that.”

Leading the way for the Tigers was Hendrickson with 15 points, Scherff with 12 and Mucha-Owens with 11. Gardner and Veldman each had six and Howe finished with five. Willner, Dawson and Doyle each recorded three and Guen had two.

The Tigers move to 1-9 on the season and will be back on the court Friday, hoping to make it two in a row against the 7-4 Spartans of Rochester Mayo.