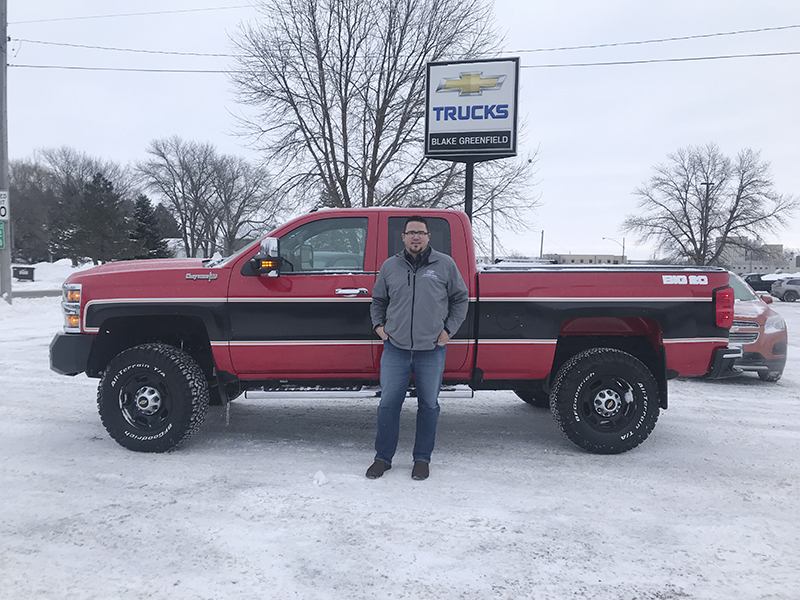 Blake Greenfield, owner of Blake Greenfield Chevrolet Buick in Wells, poses with a Big 20 Retro Silverado, which was customized at his dealership. - Kelly Wassenberg/Albert Lea Tribune

WELLS — A fun side project for the owner of Blake Greenfield Chevrolet Buick has garnered the dealership national attention.

In late 2017, Blake Greenfield’s staff accepted a 2014 Chevy Silverado for a trade. His staff seemed to find the situation humorous due to the vehicle’s unique color. The truck was woodland green, a retro color that was predominately used in the ’70s.

Greenfield described the color as a fleet color — a color used by a municipality or business to create a uniform and identifiable look across each of its vehicles.

Where his staff saw an oddity, Greenfield saw an opportunity.

Since his last name is Greenfield, he frequently uses the color green in his logo and in advertisements as a way to help customers remember the dealership’s name. As another way to promote his business, he thought he could customize the green vehicle so people would recognize it as being noticeably different than other vehicles on the road. His inspiration would be his late father’s 1973 two-tone Chevy pickup truck.

Greenfield had custom wheels, oversized tires, a lift kit and retro reproduction metal badges on the front fenders like the old trucks had. He then enlisted the help of his cousin to wrap the vehicle to create a traditional white stripe down the side of the vehicle.

“When it rolled out of his shop for the first time, I just couldn’t believe how good it turned out,” Greenfield said. “It was really exciting. It was a lot of fun.”

He said when the truck was completed, the design mimicked a square body truck style, which was built from 1973 to 1987.

“I was hoping that people out there like me that understand these trucks would catch on to what I was trying to do,” Greenfield said.

It turns out, they did.

While staff left the truck inside in the back, where no one could see it, Greenfield insisted it be moved out front. He didn’t want to advertise it, put it online or even up for sale, but he felt it might serve as a good conversation piece that might bring some foot traffic in the door and provide them with an opportunity to build a relationship.

What he didn’t expect is that another local businessman would take a photo of the truck and post it on the American Squarebody Association website. Within 24 hours, he saw a surge of traffic and likes on his Facebook page, and by 10 a.m. the next morning his staff had fielded over 30 phone calls from people from all over the United States and Canada inquiring about the truck — including a few interested buyers.

“At that point, it made me feel so proud,” Greenfield said. “It wasn’t about selling stuff. I’ve been a car and truck fanatic my whole life, and so it just felt so good to get some attention about something that I created.”

Soon the national spotlight was cast his way when a Fox News affiliate in New York came to interview him as well as Machinery Pete, who posted an interview with Greenfield on his YouTube channel. Greenfield was also interviewed by five national magazines, including Car and Driver magazine.

The attention caught him off guard, yet he soon worked with his staff to create price lists so customers could buy custom packages to recreate the look. While he still has his cousin available to do vinyl, he now has the Spring Valley dealership he co-owns do custom paint jobs upon request.

Greenfield said in the past year, about 15 to 16 trucks have been sold with buyers coming from as far away as New York, Pennsylvania and Texas.

He said the packages can be added to pre-owned or new vehicles and works best for Silverado models that are 2014 models or newer.