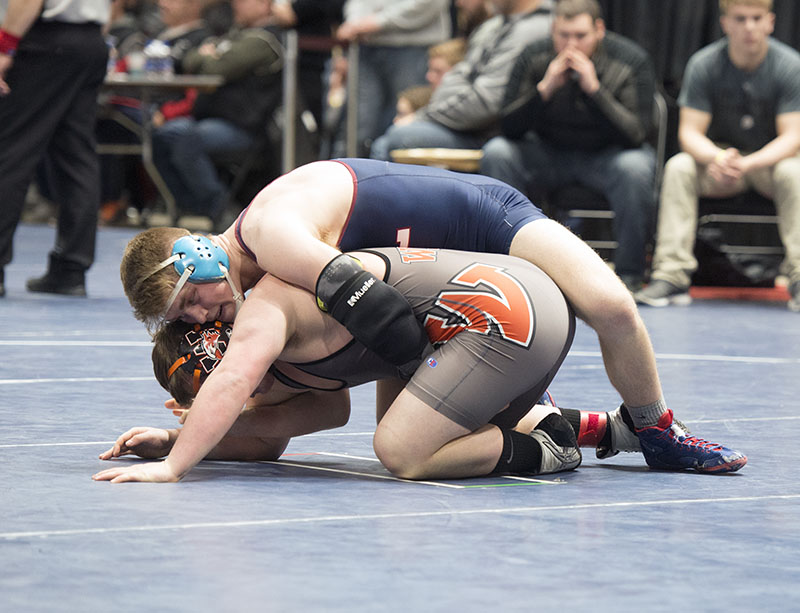 Albert Lea senior Brady Nielsen rides out his semifinal opponent Saturday at the Section 1AAA tournament. Nielsen won the match in a four-overtime thriller, and went on to take second at 220 pounds, earning a spot at the state tournament. - Tyler Julson/Albert Lea Tribune

ROCHESTER — Ten Tigers started Saturday morning with a chance to punch their ticket to the state tournament Friday in St. Paul. Of those 10, six placed in the top two of their classes, advancing them to Xcel Energy Center for a chance to etch their name in school history.

Of the nine Tigers who made the championship semifinals, five made the finals, while the other four were forced to work their way back up through the consolation bracket.

Senior Nic Cantu was the first Tiger to win his semifinal match, continuing his dominance in the tournament with a 13-3 major decision at 120 pounds. Cantu earned his trip to state with a fall in the second period in the championship match.

Eighth-grader Cole Glazier added another win the next weight class at 126 pounds. Cole Glazier won his match 11-8 to advance to the finals. A 6-3 decision victory in the championship final earned Cole Glazier his first state tournament appearance.

Sophomore Griffin Studier pulled out some late-match heroics in his semifinal match at 152 pounds. Tied at 7-7 with under 10 seconds remaining, Studier shot and successfully recorded a takedown to win the match 9-7 as time expired. Despite falling in the championship 8-2, Studier took second place and a state tournament berth after there was no true-second match. 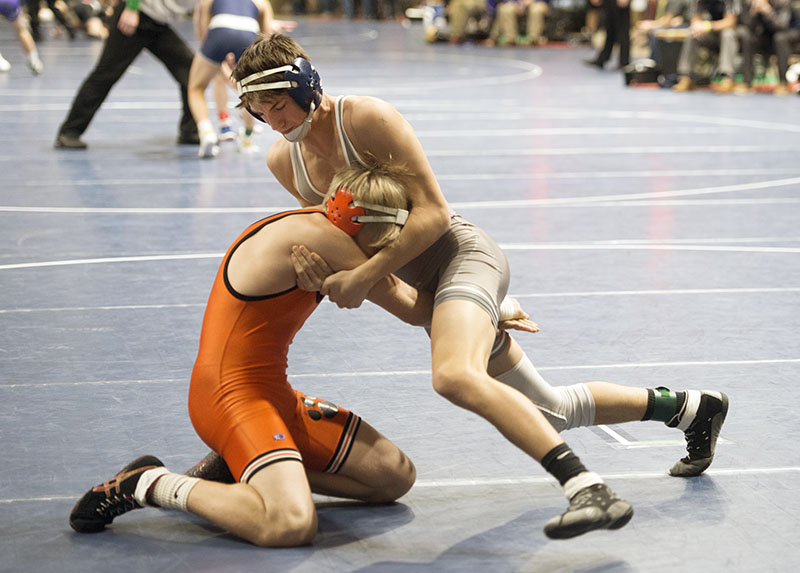 Albert Lea sophomore Caleb Talamantes drives his opponent back during the semifinal match at 145 pounds. Talamantes came up short in the match, but came back on the consolation side of the bracket to earn a trip to state. – Tyler Julson/Albert Lea Tribune

Senior Zach Glazier pinned his way into the finals at 182, earning yet another pinfall in the first period. He met with nemesis Cade King of Owatonna in the finals, where he beat King for the fourth time this season, 1-0.

Senior Brady Nielsen was the final Tiger to win his semifinal match with a hard-fought battle at 220 pounds that went into the fourth overtime period. Starting the period on bottom, Nielsen turned a quick reversal to pick up the win. Nielsen fell in the championship final 5-2, however, due to no wrestleback, was awarded a second-place finish and a trip to the state tournament.

Sophomore Joey Flores fell in his semifinal match in a 5-0 decision, moving him to the consolation bracket. Once in the consolations, Flores won his first match with a crushing 11-0 major decision, but fell in the third place match 4-2, ending his season.

Freshman Cam Davis fell victim to a pinfall in his semifinal match, sending him to the consolation side of the bracket as well. Davis flew to a second-period win in the consolations and a 12-5 decision win to earn a true-second match. After getting out to a quick 2-0 lead, Davis fell victim to a pinfall in the second period, ending his season with a third-place finish.

Eighth-grader Derrick McMillian went up against a tough Northfield opponent, falling via a 15-5 major decision. McMillian dominated his consolation semifinal with a pin in 48 seconds and earned a wrestleback after a 10-6 win in the consolation finals. He was pinned in the first period of his true-second match, finishing his season with a third-place medal.

Sophomore Caleb Talamantes lost a heartbreaker at 145 pounds, falling to a takedown in the first overtime period. On the other side of the bracket, Talamantes continued the Tigers’ dominance in the consolations with a 10-2 major decision. He came out on top of a narrow 7-6 decision, making his way to a true-second match, where he went to the wire and came out on top of a three-overtime match 4-3, earning a trip to state.

Sophomore Josiah Hedensten, who started the day in the consolation bracket, dropped his match in an 11-6 decision. In his final match Hedensten won with a fall in the first overtime period to take fifth place at 160 pounds, ending his season with a 22-19 record.