Barbara Ann Sletten, 83, of Albert Lea died Wednesday, Feb. 20, 2019, at Southfield Wellness Community in Webster City, Iowa. Memorial services will be at 1 p.m. Saturday at Good Shepherd Lutheran Church in Wells. The Rev. Meg Sander will officiate. Visitation with Barb’s family will be from 11 a.m. to 1 p.m. at Good Shepherd Lutheran Church prior to the service Saturday. Private interment will be at a later date in Chetek, Wisconsin. 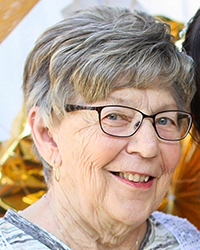 In lieu of flowers, the family suggests a donation to a public library or the Special Olympics. Online condolences may be left at www.brussheitner.com. Bruss-Heitner Funeral Home in Wells is assisting the family.

Barbara was born Jan. 5, 1936, to Albert and Myrtle (Zielsdorf) Wenzel in Marshfield, Wisconsin. The family moved to Wausau, Wisconsin, in 1941, where Barb attended school and graduated in 1954.

Barb was introduced to her future husband, Merlin, by his sister and her teacher, Julia Sletten. They were married Aug. 13, 1955.

They raised their three sons in Roseville before moving to Wells in 1969. Barb was a committed sports mom who never missed a game.

She was a longtime member of Good Shepherd Lutheran Church. She was involved in the League of Women Voters, Special Olympics and The Red Hat Society in her later years. Barb worked as a special education assistant before returning to college in her 40s to obtain her special education teaching license. She taught at Maple River High School in Mapleton until her retirement.

In her retirement she traveled extensively, served on a number of library boards and participated in book clubs. Barb was a lifelong learner, writer and could always recommend great reading material.

Merlin died in 2004. After Merlin’s death, Barb had a close friendship with Tom Wetzell Sr. until his death in 2015.