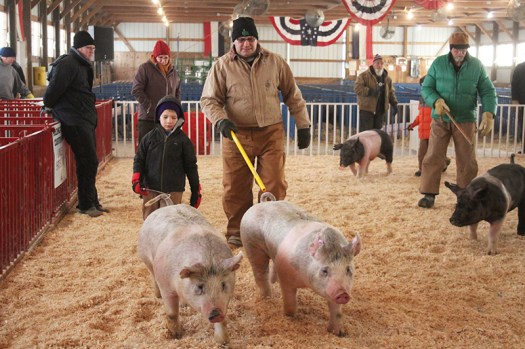 Helpers encourage their assigned hogs around the arena as those participating in Friday morning's judging contest rank the hogs from best to worst in a market class. - Sarah Kocher/Albert Lea Tribune 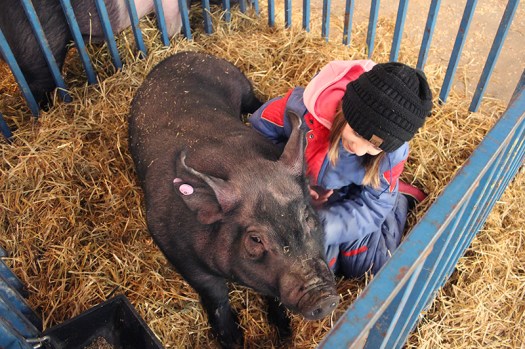 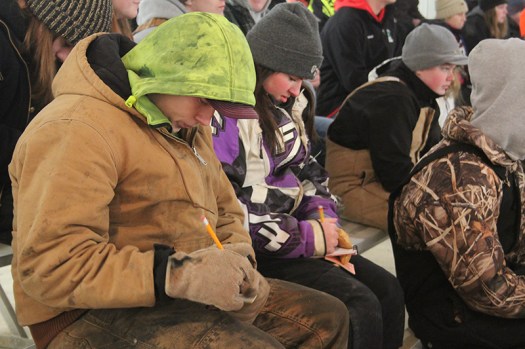 Those participating in the judging contest Friday morning score class one market barrows at the start of the competition. - Sarah Kocher/Albert Lea Tribune 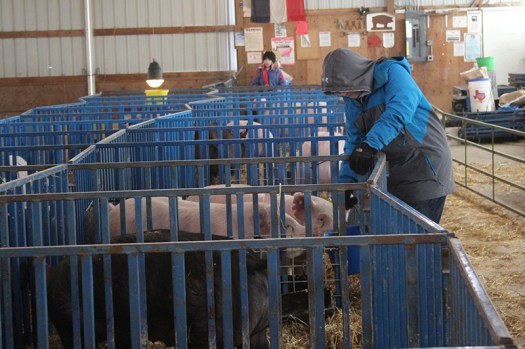 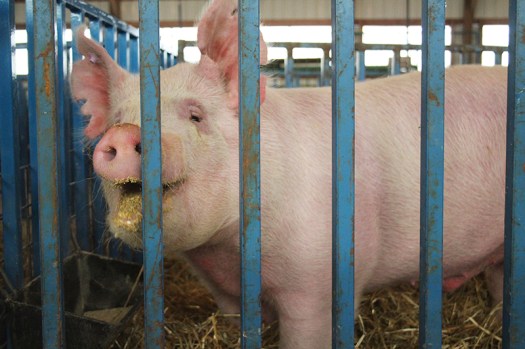 A pig enjoys its meal Friday morning before being shown as part of the barrow show. - Sarah Kocher/Albert Lea Tribune 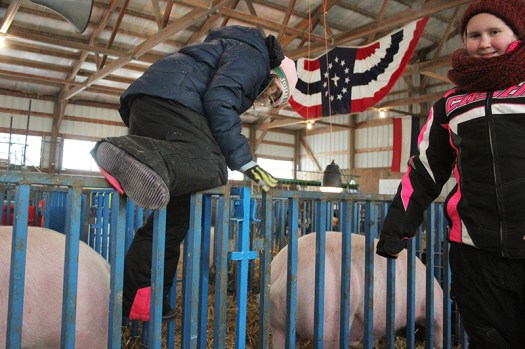 A participant climbs over the fence to check on her pig Friday morning. - Sarah Kocher/Albert Lea Tribune

If the outerwear was any indication, the smaller number of participants gathered for the 75th State Spring Barrow Show weren’t expecting spring weather.

Approximately 30 showed up with 57 hogs total, show president Daryl Mattson said. That’s a marked drop in participants and half the number of hogs shown last year.

Clair Drescher, a show manager, said they considered postponing due to weather, but knew there are always other events going on.

“We expected it to be down, even without the weather,” he said.

Mattson and Kim Nelson, a retired FFA teacher with 34 years combined experience in Glenville and Albert Lea, both saw it as a reflection of the direction of the swine industry.

“The industry is just different than it used to be,” Mattson said. “… and the weather didn’t help.”

Nelson began showing at the State Spring Barrow Show in 1974, when he was in FFA in high school. When he was a teacher in the 1980s, there would be between 900 and 1,000 pigs at the show, he remembers.

“Everybody had a few pigs,” Mattson said.

The champion pigs are the ones that best combine what each is looking for.

Rather than hold the contests in the judging arena, the show area was set up in the swine barn of the Freeborn County Fairgrounds.

“We moved it all into this building this year so we didn’t have to chase them across,” Mattson said.

Getting pigs to walk from the barn to the arena was the worst part, Drescher said.

In the swine barn, those running the judging contest had to duct tape the back of swine drivers’ jackets, because the tape wouldn’t stick to the pigs. Breath fogged up the space between conversing faces.

Addie Nielsen, 12, and her cousin Lindsey Nielsen, 10, both competed in the junior market show. They’ve been showing pigs for several years, brought to the state barrow show by their uncle, Matt Nielsen.

Lindsey Nielsen likes watching them grow from little piglets to sows. Addie Nielsen likes the experience of it, and learning more.

Matt Nielsen keeps pigs as a hobby, but he is also a commercial hog farmer.

“I think it’s good for the youth to get out — teach them responsibility,” he said.

But the State Spring Barrow Show’s role in that could look different next year.

“If we keep going, there’ll have to be changes,” Mattson said.