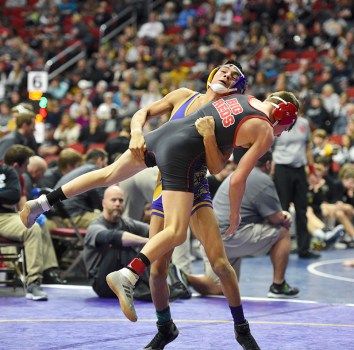 Lake Mills junior Jimmy Gallardo lifts his opponent for a takedown Wednesday at the state dual tournament. The Bulldogs finished the day with a 2-1 record in fifth place. - Lory Groe/For the Albert Lea Tribune 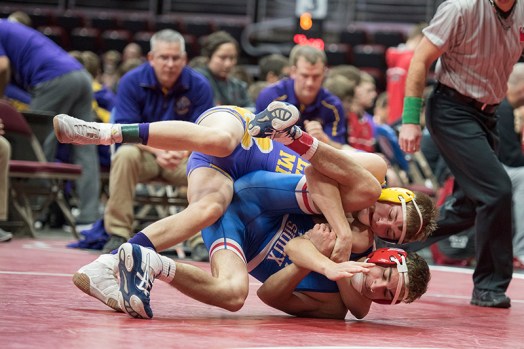 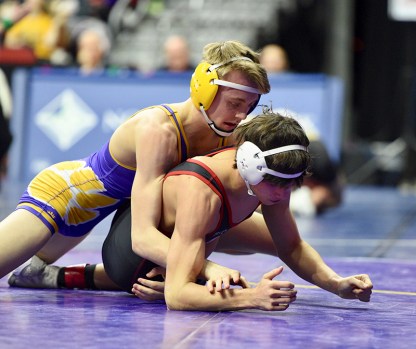 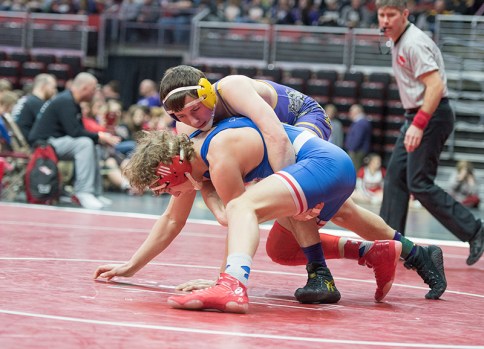 Lake Mills’ Elijah Wagner fights to keep his opponent down Wednesday morning. Wagner went on to win the match in an 8-4 decision. - Lory Groe/For the Albert Lea Tribune

Four Lake Mills wrestlers to continue on in individuals tourney

The Lake Mills wrestling team made its way to Wells Fargo Arena in Des Moines on Wednesday morning for the Iowa state dual tournament.

The Bulldogs had a rough go in the opening round, squaring up with a tough Falcons squad from West Sioux. However, they came back with a win in the consolation semifinals, before beating Emmetsburg to claim fifth place.

Junior Jimmy Gallardo started the first dual against West Sioux at 126 pounds with the tall task of facing No. 1 Adam Allard. Gallardo was pinned in the first period, putting Lake Mills down 0-6. Kyle Beery came back with a first-period pin of his own, evening the score at 6-6.

No. 5-ranked Caiden Jones, Casey Hanson and Brett Peterson each came up on the losing side for the Bulldogs at 138, 145 and 152 pounds, respectively. Jones fell via pinfall in the second period, while Hanson came up just short in a 6-4 decision and Peterson lost by fall in the final seconds of the first period.

Individual state-qualifier Elijah Wagner put the Bulldogs back on the winning track with an 8-4 decision win. However, the Bulldogs were still in a 21-9 deficit halfway through the dual.

AJ Carter dropped his match at 170 pounds in a 10-4 decision, but was picked up by teammate Zack Wagner in the next match as he won by decision, 10-5.

After a pinfall loss from Drake Harnish at 195 pounds, Max Johnson recorded the second pinfall of the day for the Bulldogs, winning in 1:45 at 220 pounds. With just four matches remaining, the Bulldogs found themselves down 30-18.

Nate Lorenson and Hayden Brua both dropped their matches via falls. Lorenson fell in the second period at 285 pounds and Brua in the first period at 106 pounds.

With the score already out of reach, Lake Mills ended the dual on high notes with pinfalls from Jack Ramaker and Trae Butler, falling 42-30.

In their second dual, the Bulldogs responded by sailing to a dominant 44-25 win over the Big Reds of Missouri Valley. Beery and Jones recorded two big wins to open the dual — Berry with a pinfall in the first period and Jones with a 17-8 major decision. Peterson and Hanson fell at 145 and 152 pounds, respectively — Peterson to a fall in the first period and Hanson in a 7-0 decision.

Elijah Wagner notched his second win of the day with a 11-3 major decision to put Lake Mills up 14-9, however, Missouri Valley picked up a pinfall win at 170 pounds to take a 15-14 lead.

The lead wouldn’t last long after Zack Wagner, Harnish and Johnson each recorded first-period pinfalls, taking just 2:13 of match time between the three. The Big Reds made a bit of a comeback attempt with two-straight victories at 285 and 106 pounds, but Ramaker would seal the win with a 4-0 decision victory at 113 pounds.

Gallardo went on to pad the lead with an 11-4 decision and Tyler Helgeson made his tournament debut at 126 pounds with a fall in just 18 seconds.

Winning their way into the fifth-place dual, the Bulldogs went up against the Eagles of Emmetsburg and came out on top 42-25.

While the fifth-place finish ends the season for most of the team, four Bulldogs will continue their state wrestling journey in the individual tournament. Elijah Wagner, Jones, Helgeson and Gallardo are set to start the 16-man bracket at 9 a.m. Thursday. Look to the Tribune for full results as they become available.