‘Grace for each day’ 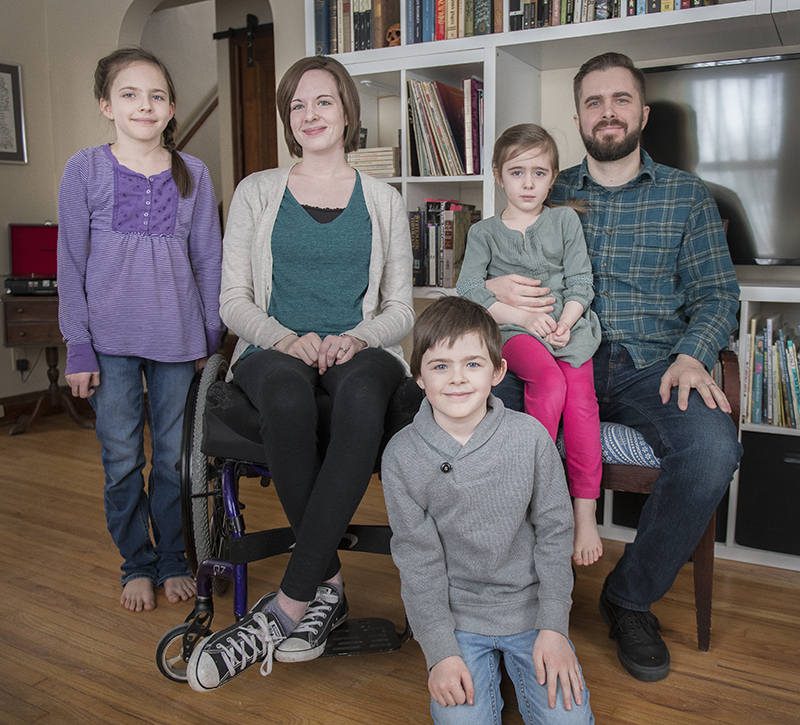 About three and a half years ago, Makala Hanson was diagnosed with ankylosing spondylitis — an autoimmune disease described as causing bony fusion, nerve damage and extensive pain. - Colleen Harrison/Albert Lea Tribune

Today, Hanson feels the effects of the condition: Several hospital visits have taken place, she feels constant pain, only sleeps approximately five hours per night and needs to use a wheelchair.

Despite the effects of the condition, Hanson said she is thankful for community support and her belief in Jesus Christ.

Hanson, 28, realized something was wrong after her youngest daughter, Annabelle, was born in 2013.

“There were just lots of complications after Annabelle was born,” Hanson said. “And so, when I started having pain, we assumed it was something that could be surgically fixed, because I actually broke my back when she was born.”

An orthopedic surgeon referred the family to a rheumatologist, who referred them to another specialist because of suspicion of a deeper issue.

Medication can be used to treat ankylosing spondylitis, but Hanson has experienced complications.

“Unfortunately in my case, my body’s been really unresponsive to treatment,” she said. “So there are people who get diagnosed with this, who are diagnosed early enough before there is any damage.”

The family is working with an insurance company to pay for the cost of her surgery to reduce the pain the condition brings and possibly allow her to walk again.

“As time goes on, it becomes less likely that the surgery would actually affect my ability to walk, because there is damage happening in that time, obviously,” Hanson said.

“It ended up being kind of a nice prep for this, because I grew up with people in wheelchairs who just did really incredible things,” Hanson said. “And so I think that was less impacting maybe than it would have been, because I had that background. And so really, it’s not so much my chair, although that’s definitely a challenge. It’s how much pain.”

A GoFundMe page has been set up by her friend, Heidi Kinnard, whom she met in high school. The campaign goal is $50,000.

“They’ve been talking to us about it for a while,” Hanson said. “We’ve known for a while that we needed something else vehicle-wise. She and her husband, Andy, have been twisting our arms about it for at least a year and a half. We were initially hesitant.”

The family hopes to have a vehicle similar to a Ford Transit van that can be converted for a wheelchair and allow it to be driven by Makala Hanson and her husband, Corey Hanson. The wheelchair the family expects to have is similar to a 400-pound chair they have in the house.

“Whatever we raise will just make it that much less that we have to come up with,” she said.

The new fully electric chair will have tilts so she can be in less pain, and it will allow her to reach cupboards.

“This disease, it makes it painful to walk and to sit,” Makala Hanson said. “That’s obviously challenging.”

She said it was initially tough to accept help from friends and family, but she appreciates the community support the family has received.  She said her children are “very compassionate” toward people with physical disabilities, partially because of her condition.

“It’s really amazing,” Makala Hanson said. “We really enjoy living here, and it’s really great to be part of this community. We have a really unique community, and the way I think that we come around each other is pretty tight-knit in Albert Lea, so it’s really amazing.”

Corey and Makala Hanson have three children: Lalani, 8, Jude, 7, and Annabelle, 5. They will celebrate their 10-year wedding anniversary in June. They planned to open a fundraising account at Security State Bank Thursday.

Corey Hanson spoke of the role their faith in Jesus Christ has played. They spoke highly of the help fellow Sojourners Church members have given, including feeding the family, watching the children, financially assisting and visiting in the hospital.

“This has definitely been difficult, but this has grown our faith, in that we have had to just trust in the grace of God more,” he said. “I mean, we really believe that that’s what gets us through each day. New mercies for that day, grace for each day.”

Makala Hanson said though she does not have much confidence her physical condition will substantially improve, she still has faith.

“I need to be realistic about what life will look like, and, for now, it’s easy to look into the future and want to worry about what things will look like in five years or 10 years, especially when you have a disease that’s not playing by the rules,” she said. “It’s progressing quicker and worse and not responding. I really just focus on each day that’s ahead of me, not worrying about what can I do tomorrow, but enjoying the physical abilities that I have today, and I think that’s really where my faith in God comes in.

“It’s, I think, easy with your faith to pretend you have it all together when you don’t need so much physical help, but when you have a condition that makes it that you need to have someone to help you shower, to get dressed. It really puts it into perspective how much we all need a savior.”