Lake Mills advances 2 wrestlers on to quarterfinals of tournament 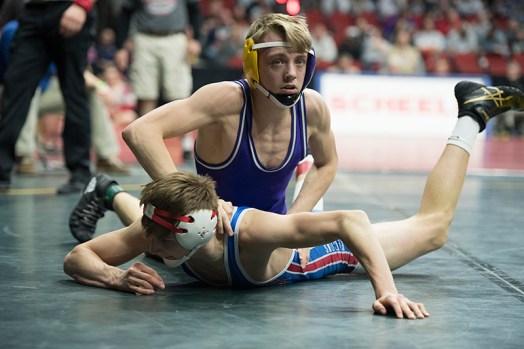 Senior Caiden Jones rides out his opponent Wednesday in his second match of the day. Jones won in a 10-9 decision. - Lory Groe/For the Albert Lea Tribune 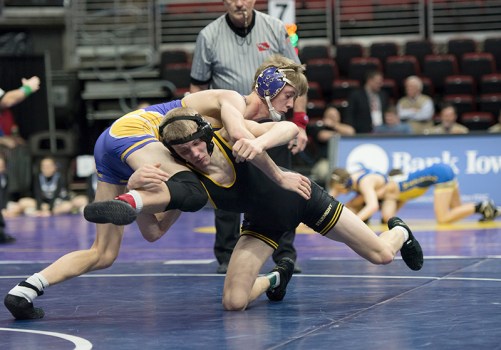 Lake Mills junior Tyler Helgeson attempts to avoid a takedown by his opponent Thursday in the opening round of the Iowa state wrestling tournament. Helgeson won his match in a 9-1 major decision. - Lory Groe/For the Albert Lea Tribune 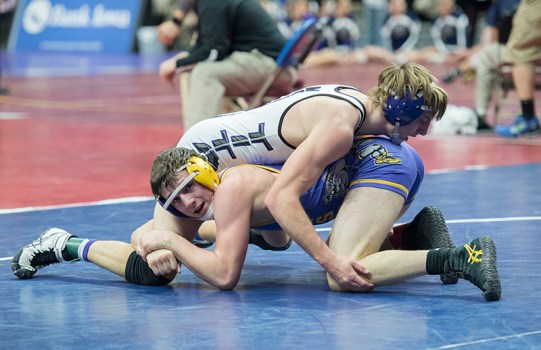 Lake Mills sophomore keeps the leg of his opponent held tight Thursday afternoon. Wagner won his match 6-2, advancing him into the quarterfinals at 160 pounds. - Lory Groe/For the Albert Lea Tribune 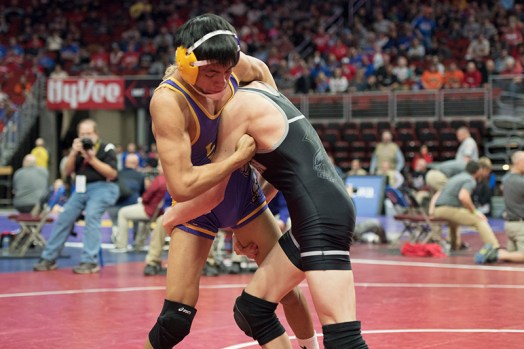 Lake Mills junior Jimmy Gallardo fell in his first two matches of the day, elimnating him from the tournament. However, he finished the season with an impressive 39-16 record. - Lory Groe/For the Albert Lea Tribune 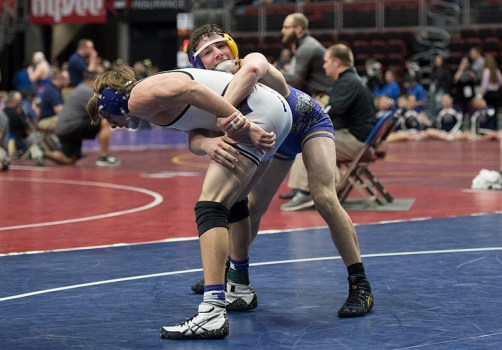 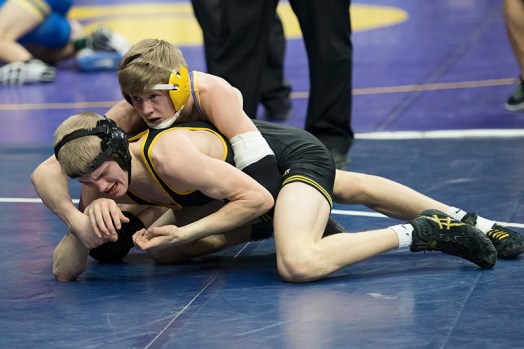 Helgeson waits to make a move on his opponent Thursday morning in the first round of the Iowa state wrestling tournament. - Lory Groe/For the Albert Lea Tribune

Senior Caiden Jones, juniors Jimmy Gallardo and Tyler Helgeson, and sophomore Elijah Wagner each earned their spot in the tournament by claiming a first-place finish at their district tournament.

Gallardo started the day for the Bulldogs at 120 pounds. He went up against a buzzsaw in No. 3-ranked Casey Baker from Interstate 35 and fell victim to a pinfall in the second period. Gallardo then moved into the consolation bracket, where he fell in an 8-4 decision, ending his tournament run. He finished his junior year with a record of 39-16.

Helgeson was up next at 126 pounds. The No. 8-ranked Lake Mills wrestler made easy work of his first-round opponent, winning the match in a 9-1 major decision. The win propels him into the quarterfinals.

Jones, the lone senior to qualify for Lake Mills, wrestled at 138 pounds. Jones fell in a 5-0 decision in the opening round, but came back with a narrow 10-9 decision to keep him alive in the consolation bracket.

Wagner, at 160 pounds, was the last of the Bulldogs to wrestle on the day. He came out on top of his match 6-2 over No. 4-ranked Chase McAlister of South Central Calhoun.

Helgeson and Wagner move on to the quarterfinal rounds, while Jones continues in the consolation bracket. All those matches are scheduled for the Friday morning session, which starts at 9 a.m. Check back with the Tribune for final results as they become available.