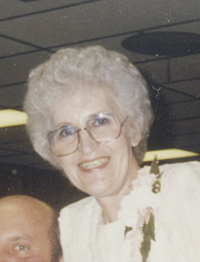 Loretta (Stieglbauer) Anderson was born May 16, 1932, to George and Etta (Nelson) at their home in Steele County. She attended school in Geneva and Ellendale. She was married to Allan W. Anderson on Nov. 11, 1949. To this union three sons were born: Jim, Mike and Randy.

She graduated from a two-year program at Albert Lea Technical College, along with her oldest son, Jim, in the early 1970s.

She worked for 13 years at Wilson & Co. and Farmstead. Previous to that, she and her husband owned and operated Black Horse Antiques.

She was an avid reader. When her eyesight failed, she enjoyed listening to audiobooks on her computer. She did many crafts and was noted for her embroidered towels and pillowcases. She loved to go antiquing. She always had cats in her life. Her last cat, Lucas, survives her.

She was preceded in death by her parents; husband, Alan; sons James and Michael; sisters Margaret Cortinas, Shirley Diaz and Delores and Donna in infancy; and brothers-in-law Jesse Diaz and Kenneth Farr.

She was generous and loving and will be greatly missed by all who knew her.

At her request, there will be no service. A celebration of her life will be announced at a later date.