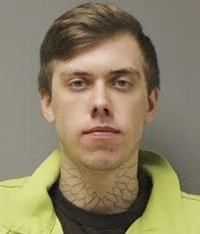 Cully Thomas Shierts, 19, is charged with fleeing a peace officer in a motor vehicle and fifth-degree controlled substance possession.

Court documents state Shierts was charged after officers were dispatched Tuesday to Motor Inn on a report of a suspicious vehicle and of at least two people trying to steal a snowblower from another vehicle.

The described vehicle reportedly belonged to Shierts, who had an active warrant. Officers were informed the vehicle had left and was at the intersection of East Main Street and Blake Avenue.

After an Albert Lea lieutenant activated his siren, Shierts allegedly pulled to the side of the road near 790th Avenue and then continued on Freeborn County Highway 46. The vehicle reportedly accelerated and passed another vehicle on Highway 46 between 790th Avenue and 800th Avenue in a no-passing zone, accelerating to more than 90 mph on roads described as “slippery with snow and ice covering.”

Court documents state as he approached Freeborn County Road 26, Shierts began to brake and was seen sliding and making a sharp north turn on County Road 26, continuing east on the Interstate 90 ramp, traveling approximately 95 mph, before exiting onto Highway 46.

The vehicle reportedly continued into Austin on Oakland Avenue, pulling into a driveway on 20th Street Northwest.

Shierts was then arrested outside the residence.

Court documents state authorities found hypodermic syringes, a digital scale, plastic bags consistent with illegal drug use and a small bag of marijuana. Some of the bags reportedly had powder residue consistent with methamphetamine and tested positive for the drug.

Shierts allegedly admitted leading officers on the chase because he had a warrant and there were drugs in the vehicle.

“(Shierts) said he came to Albert Lea to visit a friend and later admitted he came to sell drugs,” court documents state.

Judge Ross Leuning set conditional bail for Shierts at $50,000. His next court appearance is scheduled for Thursday.

In a separate file, Shierts is charged with fifth-degree meth possession.